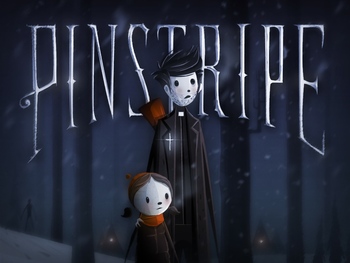 A Minister In Hell
Advertisement:

Pinstripe is an emotionally charged adventure through Hell created entirely by the one-man team of Thomas Brush over the course of four years. You play as Ted, an estranged ex-pastor forced to venture through a mysterious frozen wasteland in search of his three-year-old daughter Bo, and her perverse, demonic kidnapper, Mr. Pinstripe. As your journey takes you to ever stranger lands and introduces you to ever more peculiar individuals, you will discover the dark secrets of Ted's past, confront Bo's kidnapper, and maybe, just maybe, earn your redemption.

Pinstripe was released on Steam on April 25, 2017 for Microsoft Windows, macOS, and Linux, and can be found here

. The website for the creator, which also has information about his next project, Neversong, can be found here

Beware of spoilers! Many of the trope names themselves will give away a lot of the plot. Play the game first if you want to go in unspoiled.