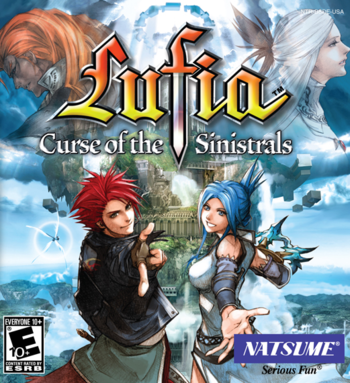 A series of four gods that call themselves the Sinistrals have come to the world and named themselves rulers of the world. They seek to subjugate the human race and eventually destroy the world. The only thing standing against them is a group of ragtag heroes led by the red-haired monster hunter Maxim.

Lufia: Curse of the Sinistrals, the fifth game in the Lufia series, is a remake of the game Lufia II: Rise of the Sinistrals. Developed by Neverland, published by Square Enix in Japan and by Natsume in America, Curse of the Sinistrals is a very different beast from the original. Though the basics of the plot remain the same, the way in which the plot unravels is different. Characters too have been slightly altered or expanded upon personality and background wise. And boy, is the art style different. The biggest change is the gameplay however. The original was a turn-based RPG that made heavy use of puzzles in dungeons. This re-imagining of the cult classic is instead an action RPG. While the dungeons are still filled to the brim with puzzles the player now directly controls one of the six heroes in combat and can switch between them by clicking on their character portraits thanks to the Nintendo DS's touch screen. Yes, six heroes. Tia and Dekar who originally left the party for their own reasons are now permanent members of your party. Lexis has taken to being the group's transportation expert and plays no role in combat.

Obviously Curse of the Sinistrals is very, very different from the original. Despite this it is still very much a familiar experience and it does pay quite a bit of homage to the original game and its sequel (story wise anyway). The soundtrack in particular is worth noting as it is composed of new variations on the pieces found in the first and second game.