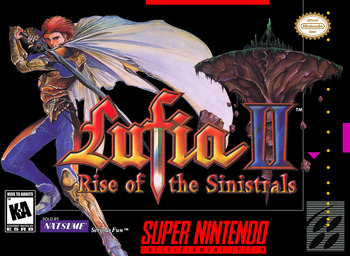 Sinistrals are back to being a nuisance, once again plotting to resurface their giant floating fortress (of doom) and bring the world to its knees. And only one hero can stop them: Maxim, swordsman of Elcid!

Lufia II: Rise of the Sinistrals is the second in the Lufia series and the prequel to Lufia & The Fortress of Doom. The conclusion to this game was known by anyone who had played at least ten minutes of the first one, but the story had more to tell. Legendary swordsman and progenitor of heroes Maxim is a simple monster hunter at the outset, eking out a meager wage with his companion Tia. On a trip to the caves near the town, Maxim encounters a mysterious woman named Iris, who hints at his great destiny. With Tia tagging along behind him, Maxim embarks on a quest to stop the Sinistrals, forming his soon-to-be-legendary party (Guy, Selan, Artea) along the way. Tia is just the first of several heretofore-unknown allies, including the happy warrior Dekar and Dr. Lexis Shaia of the recurring Shaia clan of inventors.

Lufia II threw out the random encounters in dungeons from the first game, replacing them with Pre-existing Encounters. Said monsters only move in response to the footsteps of the player, adding an element of strategy à la Mother: ambush them from the back and they'll fall more easily, but this also means you need to watch your flank. Limit Breaks have also been added: As characters take damage, their IP (Ikari Points — ikari is Japanese for anger) increases, allowing them to trigger IP Techniques that are built into certain gear. Most Techniques are offensive, while others are supportive or cast status effects. Maxim can also recruit a series of mons who evolve into formidable assist characters; essentially an AI-controlled fifth party member.

This game was lauded for introducing puzzle dungeons similar to those seen in the The Legend of Zelda games. With a series of tools (and liberal usage of the Reset spell) at the player's disposal, II's dungeons are a lot trickier than the former's.

Contains one of the saddest video game endings ever devised. Yes, even though it was spoiled by the intro to the first game. Proceed with caution.

These story and gameplay elements made Rise of the Sinistrals the agreed-upon high point of the series, though not enough to rescue it from obscurity. However, it led to a brief revival in 2010 with Lufia: Curse of the Sinistrals, a loose remake of this game which was redesigned as an Action RPG.

Its biggest legacy is the "Ancient Cave", a roguelike sidequest with recycled assets and enemies. The Cave starts you off at Level 1 and with only the barest of gear. Items found in the rare blue chests remain in your inventory when you die and start over, allowing Maxin to plunge deeper into the Cave next time.

The Ancient Cave is a standalone game which has grown in popularity over time. In recent years, variations of the Ancient Cave have been inserted into hacks of other popular RPGs: from Secret of Mana, Final Fantasy V and VI, to Skyrim and even The Legend of Zelda: Breath of the Wild. The EarthBound version breaks up the action with towns, but the building interiors are randomized and all of the sprites are shuffled around (e.g. party members, save points, ATMs, and NPCs); the result is a labyrinth of nonsense.

It is not be confused with a "randomizer" mod, which takes place in the same campaign as the main game but changes the content, such as item placements or the dungeon order.

The Ancient Cave provides examples of...