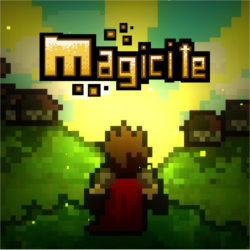 Magicite is an Indie Roguelike Platform Game, which combines Randomly Generated Levels with RPG Elements and Item Crafting. Created by Sean Young, it was funded through Kickstarter on November 19th, 2013, and released on PC through Steam in June 2014.

Set in an underground world whose inhabitants have been driven from the surface by an invading Scourge, the goal is for the player character to progress through many stages with varying climates (or Biomes). During each stage, the player must fight enemies to gain experience and other materials, chop trees and mine rocks for wood and ore respectively, and use these resources to craft equipment they will need on their journey. Between each stage are towns, in which the player can buy items or fabricate more advanced equipment. More playable races and outfits to wear can be unlocked once certain tasks have been accomplished.