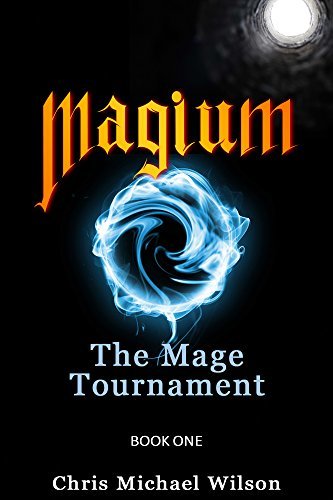 They say there is a very fine line between bravery and stupidity. As I stand here, in the middle of this forest, gazing at all of the explosions far in the distance, I realize I may well have crossed that line, to a point of no return.
— Barry narrating the first chapter
Advertisement:

Written by Chris Michael Wilson (better known as "black_whirlwind45", his username on Reddit) and first released in July 31, 2016, Magium is a text adventure game similar to Choose Your Own Adventure books.

Set in a medieval fantasy setting that includes futuristic magical devices, the story takes place in the continent of Varathia, in which is held a deadly mage tournament. The prize of the contest is the source of all magic itself: the Magium. The playable character is Barry, a self-proclaimed ordinary guy who joined the tournament, in the aim of using the prize to fulfill his lifelong dream of becoming a mage. As the game progresses, The Player and Barry meet other participants, who would become allies or enemies, and find out about the mysteries of the continent and its inhabitants.

Aside from the traditional choices influencing what happens in the story, Magium also has a stat system in the form of the magical device used by Barry: the stat booster, which will allow the player to upgrade one of the following stats: strength, speed, toughness, reflexes, hearing, observation, combat technique, ancient languages, premonition and eventually aura concealment, magical sense and aura hardening. Those stats will be subject of stats checks, which verify that the stats meet the requirements to perform certain actions that would influence the outcome of events in the game.

The game will likely be divided into 5 books in the main series and 2 prologues, with the first three books being currently available at Google Play

, although the final chapter of book 3 is yet to be released.