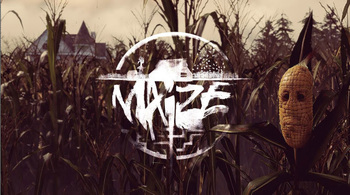 This is the least ridiculous screenshot of the game.

is a comedic First-Person Perspective Adventure Game released on PC through Steam on December 1st, 2016, before getting ported to Playstation 4 and Xbox One on September 12th, 2017.

The player character awakens on an abandoned farm, with no prior knowledge about how they got there, what they're doing, or why they even came there in the first place. They quickly find that this seemingly abandoned farm is overrun by talking, sentient corn because a pair of scientists misinterpreted a government memo.To quote the creators: "That's the least ridiculous thing about this game", and they're really not kidding. What follows is a very odd little adventure as the player dives into the history of the farm, the experiments that lead to the origin of the sentient corn, all while accompanied by an angry Russian teddy-bear that berates you and this situation every step of the way.

Given that a good number of the game's surprises are based in Bait and Switch comedy, it's highly advised you play Maize before reading this article.

What are you still doing on this STUPID page?! What? You want Vladdy to enter another vent? *sigh* Why does Vladdy put up with you?