Literature / Choose Your Own Adventure

This is the entry for the actual Choose Your Own Adventure series. For the genre as a whole, see Gamebooks. 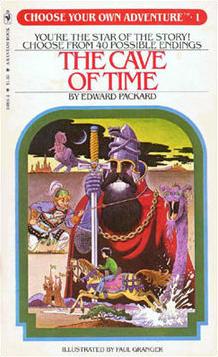 An Adventurer Is You!

The Choose Your Own Adventure series is a famous and highly successful example of the Gamebook genre with 250 million copies in print. The series, begun in 1979, saw the peak of its fame in The '80s, and after Bantam Books ceased publication of the books, was revived in 2007 under the independent company Chooseco.

The stories are told in Second-Person Narration, which is justified in a meta sort of way: you're the one reading the book and making the decisions about what to do next, so you should play the role of the protagonist. Plots included Time Travel, UFO abduction, cross-continent racing, getting lost at sea, solving murder mysteries and coping with supercomputers. There were many Crossover titles, including ones with Disney movies, Star Wars, Goosebumps, and Indiana Jones. There are typically more ways of failing and/or dying than succeeding. Death sometimes comes in horribly inventive ways, yielding textual Ludicrous Gibs.

In July 12, 2018 Z-Man Games released a Tabletop Games adaptation of House of Danger that incorporates some RPG elements and expands on the story.

As you venture further down, you are confronted with the following tropes:

Suddenly, after warping through various strange wormholes and multiple dimensions, you find yourself in front of a lighted screen, reading a TV Tropes web page.