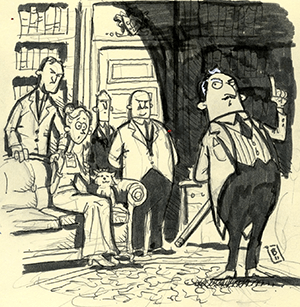 "And that's how I know that it was you who stole my favorite teddy bear!"
Image

Used with permission.
"I've called you all here to the parlor to watch as I gradually solve the crime. One of the people in this room... IS A BIG MURDERER!"
— Dr. Zoidberg, Futurama
Advertisement:

A Subtrope of The Summation, this commonly occurs at the end of a murder mystery.

All of the suspects gather together in a room, so that the detective can tell them who the murderer is. The detective goes down the list of suspects one by one, explaining why they are innocent — although some of them may be guilty of other, minor, crimes. Eventually he will get to the guilty party, and explain how and why the murder was committed.

Expect at least one embarrassing secret to be unearthed during this scene.

Common stock phrases in these scenes:

Fridge Logic kicks in when you realize that, if the detective already knows who the killer is, he should just have the guy arrested. And it's probably best to do that by surprise, rather than by giving a long speech in which the list of suspects is gradually shortened and the killer might be tempted to run away before anyone can put him in handcuffs. Additionally any testimony and statements given by anyone present at the summoning might be inadmissible in court, as those present have been led to believe speculation presented as fact, but the trope works well from a storytelling perspective, since it builds suspense and explains all the loose ends.