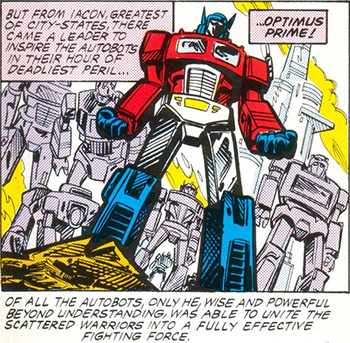 Also, he can transform into a truck.
"A leader is a dealer in hope."
— Napoléon Bonaparte
Advertisement:

Whereas the Big Bad is considered the ultimate evil to be defeated, the Big Good is the cornerstone of any heroic faction. This character is explicitly stated to be a counterpart to combat the forces of evil, likely calling all the shots in the organization and is normally the highest-ranking or the absolute most powerful. Since The Hero is usually, but not always synonymous with the protagonist, the Big Good does not always fill that role, as it is usually more dramatic for the protagonist to work upwards from the bottom. It may be stated (at least in the beginning) that The Hero is expendable whereas this character is not. The Big Good is simply the most valuable member of the heroic movement in a given work, whether in terms of rank, function or wisdom. If not The Hero, then they will most definitely be the mentor to craft The Hero into being the weapon they need him to be.

Authority Equals Asskicking is in full force most of the time, with the Big Good usually starting off several orders of magnitude more powerful than The Hero. The character may be servant to a greater good just like their evil counterpart could be a servant to a greater evil. Unlike the Big Bad, however, the Big Good can be taken down rather early — to show just how powerful the enemy has gotten by that point or as part of a greater plan. One of the more common ways this is done is to have the two Bigs confront each other directly, with the Big Good coming up short. For extra pathos, the Big Bad was once their second in command. Expect The Hero or some other member of the True Companions to take up the mantle by the time the Grand Finale comes round.

Might occasionally be a great hero who is believed to be dead (might be true, or they might be simply hidden) or someone who most characters think is just a myth until they appear in the flesh. At the beginning of a series, expect the Big Bad to be much more worried about this character than about The Hero. The Hero may not even register on any antagonist's radar while all of them will be out to off the Big Good. The Dragon is far more often The Rival or Worthy Opponent to The Hero than the Big Bad.

For the Villain Protagonist, the Big Good is the biggest opposing force against them.

Do note that this trope is about a character role and as such there are multiple Heroes that can fulfill this role, including but not limited to:

At its most general, the Big Good title simply refers to the leader of the largest group opposing the Big Bad. Keep this in mind when suggesting examples. See also Greater-Scope Paragon.

Not related to Big Fun.

GAIA is an incredibly advanced AI who's job was to return life (and mankind with it) to Earth after the Faro Plague wiped it out, and was the one to create Aloy when HADES went rogue.

GAIA is an incredibly advanced AI who's job was to return life (and mankind with it) to Earth after the Faro Plague wiped it out, and was the one to create Aloy when HADES went rogue.