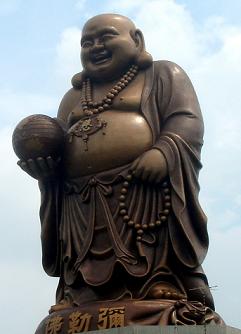 Yeah Jesus Was Way Cool, but Buddha? Fun incarnate.note Technically, the guy in the picture above is Budai

, a deified Buddhist monk, and not the Buddha himself

"You and I have a tendency towards corpulence. Corpulence makes a man reasonable, pleasant and phlegmatic. Have you noticed the nastiest of tyrants are invariably thin?"
— Gracchus, Spartacus
Advertisement:

The big, fun, lovable fat guy. May be a Boisterous Bruiser depending on how much they like to fight and shout, or just a Gentle Giant. Often a king or other aristocrat whose wealth and lifestyle lends itself to fabulous feasts, a Chubby Chef who delights in his/her craft, or in contrast a modern young man whose weight makes him more identifiable. Depending on the fandom, he can also be a Big Beautiful Man.

Almost Always Male it seems, probably because of the usual Double Standard about attractiveness and such and most likely classed as a Tomboy. If female, though, she's likely to be a Big Beautiful Woman and maybe a Sassy Black Woman, or often, simply a female variant.

Contrast the Fat Bastard, which is when the fat person is, well... a bastard, and this trope's corollary Lean and Mean, when a skinny person is unpleasant. See also Fat Comic Relief.

Nothing to do with the song from the musical adaptation of Heathers.

Owen makes one of the biggest (no pun intended) impressions in the first episode of Total Drama Island.

Owen makes one of the biggest (no pun intended) impressions in the first episode of Total Drama Island.