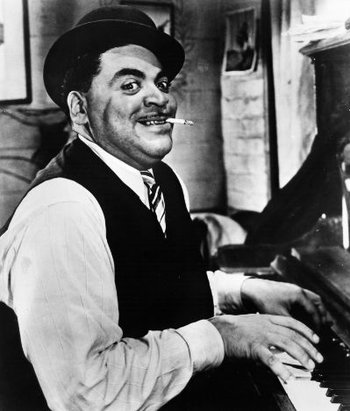 Ain't misbehavin' / I'm savin' my love for you
"Jazz isn't what you do, it's how you do it."
Advertisement:

A Harlem native, Waller started playing piano at the age of six, and later began recording for Victor Records in 1926. Over the next twenty years, he recorded numerous jazz records and composed songs for a few musicals. His work includes compositions such as "Honeysuckle Rose" and "Jitterbug Waltz", along with covers of pre-existing songs such as "After You've Gone," "Go Down Moses" and "Viper Drag."

Sadly, his career was cut short in 1943, when he passed away from pneumonia while traveling cross-country via train.

He also appeared in the films King Of Burlesque, Hooray For Love, and Stormy Weather.

His great-grandson, Darren (born 1992), is a National Football League player.

Tropes present in Fats Waller's stage persona and his music include: