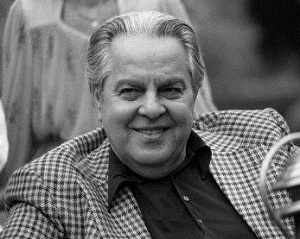 "I love looking at the old Bond films. Maybe it's purely out of reminiscence, the nostalgic things you think about. But there were some very good films made, and I think that the public has enjoyed them, too."
Advertisement:

Broccoli's early film career saw him do nothing spectacularly famous, although The Trials of Oscar Wilde was a spectacular flop that bankrupted him and then partner Irving Allen. However, a certain series of British spy novels by one Ian Fleming was becoming very popular, and Broccoli saw an opportunity. He found the rights had already been sold, so he decided to team up with a man named Harry Saltzman. When the studio execs at United Artists objected to their casting of Sean Connery as the lead character, they insisted on it. And it paid off.

After Dr. No, Broccoli only produced two non-Bond films with Eon Productions (Call Me Bwana and Chitty Chitty Bang Bang, the latter also from a Ian Fleming novel), the company would be entirely dedicated to produce Bond films from then on. He narrowly avoided death during the making of You Only Live Twice after cancelling a flight at the last minute.

Saltzman, who had made some bad investments, sold his 50% stake in Bond to United Artists in 1975, then was widowed and pretty much retired as a result. Broccoli ran the show alone starting with The Spy Who Loved Me. He never received an Oscar, but was awarded the Irving G. Thalberg Memorial Award for lifetime achievement at the 1982 Academy Awards. He also got a star on the Hollywood Walk of Fame.

Broccoli's first marriage ended in an amicable divorce, and his second wife died of cancer. He had a daughter, Barbara Broccoli, with his third wife, Dana Natol (formerly Wilson, as she was previously married to actor Lewis Wilson). He died in 1996 of heart failure, having had a triple bypass only a year before. Tomorrow Never Dies had a dedication to him. By the time of his death, Cubby had passed the torch to Barbara and her half-brother, Michael G. Wilson, and together they run the James Bond franchise since GoldenEye, and up to this day.

And if you're wondering — YES, his surname refers to the vegetable. Broccoli is Italian for "flowering crests of a cabbage". There's an Urban Legend that an ancestor of his did breed, discover, and/or was somehow involved with the vegetable, enough so to have it named after him or her, but more likely it's the other way around, that his ancestors were named after the vegetable. Broccoli himself only claimed that a relative brought broccoli to the US in the 19th century, and broccoli was around long before that, and he did work in his immediate family's vegetable business in his youth.

He also received an honorary CBE.