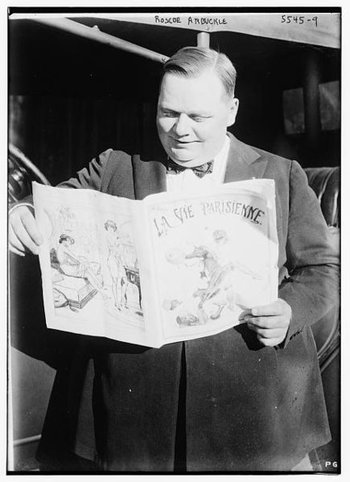 The poor fat bastard.
"Acquittal is not enough for Roscoe Arbuckle. We feel that a great injustice has been done him...there was not the slightest proof adduced to connect him in any way with the commission of a crime. He was manly throughout the case and told a straightforward story which we all believe. We wish him success and hope that the American people will take the judgement of fourteen men and women that Roscoe Arbuckle is entirely innocent and free from all blame."
— The jury's statement during Arbuckle's third trial
Advertisement:

Roscoe Conkling "Fatty" Arbuckle (March 24, 1887 – June 29, 1933) was a silent film star in the 1910s, a pioneering film comedian and one of Hollywood's biggest stars during The Silent Age. Today, however, he's best known for being the Trope Maker for celebrity scandals, and for being partly responsible for the development of The Hays Code.

Arbuckle was born on March 24, 1887 in Smith Center, Kansas. He had a birth weight of 13 pounds, causing disbelief in his father that he and his wife, who were both slim, could produce such a child. Consequently, his father named him after senator Roscoe Conkling, a man that he despised. This was only the beginning of a long and spiteful relationship between father and son.

Arbuckle started a singing career when he was a child, and began working in vaudeville when he was a teenager. He appeared in his first film in 1909, and started doing regular film work in 1913 after moving to Universal Pictures. Despite his size, Arbuckle was surprisingly agile and acrobatic, and his films were known for their fast-paced comedy. One thing that his movies helped to popularize was the Pie in the Face gag — the first known instance of a thrown pie landing in someone's face was in his 1913 short A Noise from the Deep. His comedy proved to be a huge hit — by 1914, Paramount Pictures was offering him and his frequent collaborator Mabel Normand (one of Hollywood's first female writers, producers and directors) an unheard-of contract of $1000 a day, 25% of all profits and Protection from Editors. By 1918, he was getting a 3-year, $3 million contract. In addition to making movies, Arbuckle managed to secure the big breaks of a number of actors whose names have become synonymous with early Hollywood, including Charlie Chaplin, Buster Keaton and Bob Hope.

Arbuckle was always very sensitive about his weight, and refused to let his size be used for cheap fat jokes (such as getting stuck in a doorway or chair). He disliked his nickname of "Fatty", which had been given to him in school, and discouraged people from addressing him as such off-screen. Eventually, his weight, along with his drinking, started to cause him health problems. In 1916, he got an infection in his leg that was so bad that the doctors considered amputating it. While Arbuckle recovered with both legs intact, he had lost 80 pounds and had become addicted to morphine.

On the night of September 5, 1921, Arbuckle attended what would become the most fateful party of his life. The morning after, an aspiring young actress named Virginia Rappe suffered a ruptured bladder in one of the hotel rooms that he and his friends had rented for a night of festivities, and died four days later. Before she collapsed, Rappe claimed that "Arbuckle did it" and "He hurt me" during the party. Rappe suffered from chronic cystitis, a condition that flared up whenever she got drunk — a problem that could not have been helped by her heavy drinking habits or the low quality of Prohibition-era booze. There exist two stories about what exactly happened to Rappe at the party:

You have three guesses as to which version of events was picked up by the media, and the first two don't count.

Virtually overnight, the incident became a major media sensation, with exaggerated stories showing up in every newspaper. Rumors replaced the ice with a bottle of Coke or champagne, and created an image of Arbuckle as a lecherous slob who used his size to overpower and rape young women — a far cry from the Gentle Giant that he was in real life by all accounts. Public opinion turned against Arbuckle so quickly and harshly that, when his wife was entering the courthouse to support him, somebody tried to shoot her.

Three highly sensationalized trials were held, but it was clear that the prosecution really didn't have much of a leg to stand on. Most infamously, the prosecutor refused to have Delmont, the one who had made the accusation in the first place, testify before the court, as her testimony was simply too disjointed. Although Arbuckle was ultimately acquitted, with the case against him getting torn apart on the stand and the jury even apologizing for the injustice that had been done to him, the damage was already done. Arbuckle was the O. J. Simpson of The Roaring '20s, with the public feeling that he was guilty no matter what the court said. He had gone over $700,000 in debt due to legal fees, and he lost his house and his cars to pay the debt. He had been blacklisted from the American film industry, with theaters refusing to show his films. Moral Guardians, including then-Postmaster General William H. Haysnote If that name sounds familiar, it should. Hays would go on to chair the Motion Picture Producers and Distributors of America the following year; his efforts to "clean up" Hollywood led to the creation of The Hays Code in the early 1930s., declared the Arbuckle case and other contemporary scandals (including a murder case involving former collaborator Mabel Normand) to be proof of the poor standards of morality in Hollywood, and started pushing for increased censorship.

, even though the blacklist was ended within a year, he was unable to find any regular employment and only had small parts in two movies during the rest of the decade, and in 1924 started directing under the pseudonym of William Goodrich. He finally returned to acting in 1931... only to die at a party two years later. Buster Keaton always supported his friend and regarded him as a major influence on his films.

A biopic about Arbuckle has been stuck in Development Hell for nearly thirty years, and some

have suggested that the project is cursed. The first actor they had lined up to play the original "live fat, die young" comic was John Belushi... in 1982. Then John Candy was attached to it... in 1994. And then Chris Farley stepped up... in 1997. (The film version of A Confederacy of Dunces seems to be condemned to the same fate because those same actors had also been considered to play Ignatius J. Reilly before they died.)

Fatty Arbuckle films with their own pages:

Tropes used in other Arbuckle films: