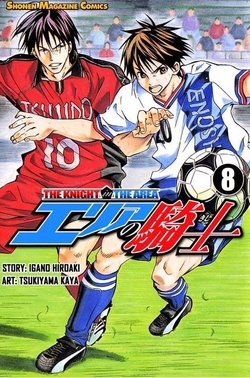 Kakeru Aizawa is an energetic and dedicated eighth grader who serves as the manager for his school’s football team. Though he was well known for being a talented player the previous year, an accident during one of his games caused Kakeru to vow never to play competitively again. Still passionate about the sport, Kakeru dreams of one day becoming a professional football trainer so that he can work alongside his older brother Suguru, the ace of the school team who has represented Japan in international competition.

However, Suguru does not approve of his younger brother’s goal, calling Kakeru a coward for letting his fears hold him back. Further complicating matters is the return of a young woman and former childhood teammate named Nana Mishima, a.k.a. “Seven”, who Kakeru had a crush on years ago. Shortly thereafter, a challenge issued by a mysterious masked individual reminds Kakeru just how much he misses competing against others in the sport he loves.

Area no Kishi (lit. "Knight of the Area", i.e. of the penalty box) is a sports manga written by Igano Hiroaki and drawn by Tsukiyama Kaya. The manga was serialized in Weekly Shonen Magazine from 2006 to 2017, and compiled into 57 volumes. An anime adaptation aired starting in January 2012.

Tropes used in Area no Kishi: