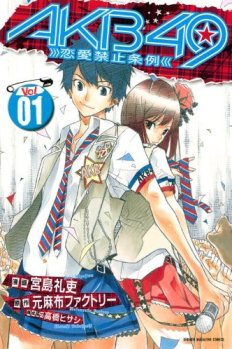 Urayama Minoru, an Ordinary High-School Student, is disillusioned and apathetic towards his current life and future prospects. His crush, Yoshinaga Hiroko, is however secretly aspiring to become an Idol Singer. When Minoru found out that Hiroko is making a final attempt to pass the audition for the famous idol group AKB48, he decided to support her dream at all costs, even if it meant cross-dressing to participate in the same audition and watch over her from the back. A heated outburst in the audition caught the attention of the group's producer and both Hiroko and Minoru — who assumed the name "Urakawa Minori" — unexpectedly passed the audition and became trainee members, or kenkyuusei, of AKB48. Now Minoru must not only protect Hiroko's dream, but also his true identity as well as he plunges unwittingly into the entertainment world.

A shounen manga by Miyajima Reiji and Motoazabu Factory, AKB49~Ren'ai Kinshi Jourei~ is the first manga that features the Real Life idol group AKB48 and actual AKB48 members appear from time to time as supporting characters. It was serialized in Weekly Shonen Magazine from 2010 to 2016.

In 2014, the manga was adapted into a musical stage play, with members of the AKB48 group as the main cast. The musical adapted the main story arc of the first five volumes of the manga, the "X Day" arc. Urayama Minoru/Urakawa Minori was portrayed by Miyazawa Sae, Yoshinaga Hiroko was double-cast and portrayed by both Kojima Mako and Owada Nana, and Okabe Ai was portrayed by Suda Akari.