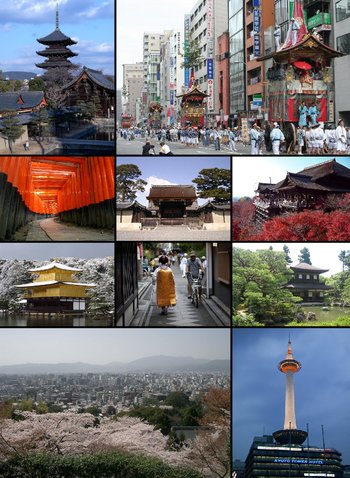 Kyoto (京都, Kyōto), the capital of Kyoto Prefecture (京都府, Kyōto-fu), now ranks as only the eighth largest city in Japan, behind Tokyo, Yokohama, Osaka, Nagoya, Sapporo, Kobe and (since 2011) Fukuoka, but its history and heritage remain unparalleled. It was the imperial capital of Japan for over a thousand years, until the Meiji Restoration transferred the capital to Tokyo.

In 784, Kammu, the 50th Emperor of Japan, moved the imperial court from Heijo-kyo (Nara), which had been the capital for the past 74 years, probably to escape the influence of that city's numerous Buddhist temples. However, the new location, Nagaoka, was not a very desirable place to build a city, and so proved to be as temporary a capital as those which had preceded Heijo-kyo, such as Asuka and Fujiwara. And so, in 794, Kammu once again moved his court to a new capital city built at great expense. Not until 1074 years later would the capital move again.

The city was originally named Heian-kyo (平安京, Heian-kyō), meaning "Capital of Peace and Tranquility." In the 11th century, it was renamed Kyoto (京都, Kyōto), simply meaning "Capital City." The city was also commonly known as Miyako (an Alternate Character Reading of 都) before the emperor moved to Tokyo, and for a while after was officially known as Saikyo (西京, Saikyō), meaning "Western Capital" (Tokyo being the "Eastern Capital").

Heian-kyo was located in the middle of a valley surrounded by mountains on its north, east and west sides. The waters of the Kamo River defined the city's eastern boundary. To the northeast of the city site lay Mount Hiei. Since the northeast direction was considered evil for some reason, perhaps because of wars with the not-yet-conquered Ainu people, Kammu had a Tendai priest named Saicho climb the mountain in 788 and establish the temple of Enryaku-ji on top of it to ward off evil spirits.

The city plan of Heian-kyo, like those of Heijo-kyo and Fujiwara-kyonote The capital of Japan before Heijo-kyo, located in present-day Kashihara, Nara Prefecture., was based on a grid pattern modeled on that of the Sui-Tang Chinese capital of Chang'an. On a rectangular plot of 5,312 meters by 4,569 meters, 33 north-south streets intersected 39 east-west streets at regular intervals. The city zones and major east-west streets were numbered from Ichijo ("first street") to Kujo ("ninth street"), with the lower-numbered zones reserved for wealthier classes. Two of the north-south streets, Horikawa-no-koji and Nishihorikawa-no-koji, had streams running down the middle.

Chinese feng-shui philosophy influenced the bilateral symmetry of the city plan. The Daidairi ("Great Imperial Palace") was placed at the north center of the city, spanning the nine blocks between Ichijo and Nijo ("second street") and the middle eight blocks between Nishiomiya and Omiya. A broad boulevard, Suzaku-koji, named after the Vermilion Bird (朱雀) of Chinese legend, separated the city's left half from its right half, running south from the main gate of the imperial palace, Suzakumon, to the city's southern gate, whose name (羅生門) has been variously read as Raseimon, Rajomon, and Rashomon. Two Buddhist temples, Saiji and Toji, were placed equally distant from Suzaku-koji at the southern edge of the city; their size was limited to four blocks each. In a slight break with tradition, the imperial garden was not placed to the north of the palace, but was located to the southeast of the main gate. A tiny remnant of this garden, Shinsen-en (神泉苑), was acquired by Toji after centuries of neglect and dissipation; it is practically all of Heian-kyo that still exists today.

The elegant plans of Heian-kyo were disrupted by reality in many ways. The encircling wall that was part of the plan for all cities of its type was only built around the southern gate. The marshy western half of the city had already started to decline by the middle of the ninth century, and new buildings on the outskirts pushed the center of activity to the north and east. Buddhism, so deliberately marginalized within the capital, exerted a powerful influence from the hills outside it—not from Kiyomizu-dera, the ancient temple built near a sacred waterfall long before city's founding by the Hosso sect, but from Enryaku-ji, whose monks frequently descended upon the city in enough force to frighten emperors. Enryaku-ji appropriated Shinto gods into its own ceremonies of worship, subordinating the imperial religion to Buddhist influence, even though the ancient Shinto shrines of Kamigamo, Shimogamo and Fushimi Inari were also in the proximity of Kyoto. In the 11th century, Enryaku-ji began to raise a formidable private army, which would remain active for centuries in burning rival temples to the ground and slaughtering their priests.

Moreover, very few of the 72 emperors in Kyoto had any meaningful influence over the country's actual government. During most of the Heian period, the Fujiwara clan occupied most of the important bureaucratic positions, in no small part because of their practice of frequently marrying their daughters to emperors, who were often obligated to abdicate at an early age to join the priesthood. The Fujiwara clan, in turn, was ultimately displaced from political power by the Taira and Minamoto samurai clans, whose rivalry culminated in the Genpei War. After Minamoto no Yoritomo became shogun and established the first shogunate (military dictatorship, known in Japan as bakufu (幕府)) in Kamakura, Kyoto declined in prominence, and parts of the old city were abandoned entirely. The old Imperial Palace burned down for the last time in 1227.

It was in the 14th century that the seat of power returned to Kyoto. Emperor Go-Daigo instigated a failed coup against the shogunate in 1331, for which he was driven into exile and a puppet emperor installed in his place. However, several prominent samurai defected to Go-Daigo's side. One of them, Ashikaga Takauji, marched on Kyoto in 1333 and succeeded in overthrowing the puppet emperor. This started the Kenmu Restoration of imperial rule, which lasted for three years before Takauji, intent on keeping power for himself, drove Go-Daigo out of Kyoto once again. From then until 1392, Japan had two contending emperors, a northern one in Kyoto, and a southern one in Yoshino. Takauji had wanted to establish his shogunate in Kamakura, but circumstances obligated him to remain in Kyoto, as did his successors into the sixteenth century.

The third Ashikaga shogun, Takauji's grandson Yoshimitsu, gave a name to an era of Japanese history when in 1378 he built the Hana-no-Gosho ("Flower Palace") in the Muromachi district, in which much of the nobility came to settle. Yoshimitsu gave important support to the emerging art of Noh theatre, and after retiring built the even more lavish Kinkaku-ji (Golden Pavilion) in Kitayama, covered in bright gold leaf. The ninth Ashikaga shogun, Yoshimitsu's grandson Yoshimasa, built the Ginkaku-ji (Silver Pavilion) in the foothill village of Shishigatani as a companion shrine to Kinkaku-ji; that it was never covered with silver leaf can be attributed to the strained financial circumstances caused by the Onin War, which destroyed much of Kyoto between 1467 and 1477.

In the Sengoku Jidai, control of Kyoto was the objective of many of the warring daimyo. Oda Nobunaga succeeded in taking Kyoto in 1568, appointing the fifteenth and last Ashikaga shogun and deposing him five years later. In 1571, Nobunaga conducted a spectacular Leave No Survivors campaign against Enryaku-ji, which he completely leveled.

Not until after Nobunaga's successor, Toyotomi Hideyoshi, secured control over the full country and made himself everything but shogun, did the rebuilding of war-torn Kyoto begin in earnest. Hideyoshi built a thick if poorly-defended wall around the city (a few parts of which survive today), and narrowed the streets supposedly to discourage riots.

Nijo Castle was built by Tokugawa Ieyasu and his first few successors largely for ceremonial purposes, though it did maintain the outward appearance of a military fortress. The castle's lavish architecture had far more to do with demonstrating the wealth and political influence of the new shogunate than enshrining local traditions. It remained unoccupied throughout Japan's two centuries of isolation, and only in the 1860s, when incursions by foreigners spurred an imperial decree ordering their expulsion, did the shoguns start making visits to Nijo Castle again. But time was running out for the shogunate, and on January 3, 1868 the last shogun, Tokugawa Keiki, formally relinquished his authority to Emperor Meiji at Nijo Castle, though this act merely set off a new round of internal conflict known as the Boshin War.

After the Meiji Restoration, Buddhism fell out of political favor and many of the old temples fell into disrepair. The Shinto revival is exemplified to Kyoto by the building in 1895 of the Heian Shrine. Kyoto was linked to Lake Biwa by the Sosui canal (opened in 1890) and the Keishin electric railway (opened in 1912). Kyoto grew in population in the early twentieth century by annexing the formerly independent municipalities of Fushimi in the plains to the south and Yamashina in the valley to the east. More recently in The '90s, the city hosted the conference on greenhouse gas emissions which led to the eponymous Protocol.

Through its long history, Kyoto has suffered through many devastating events that wreaked destruction upon much of the city, from earthquakes to fires (the Tenmei fire of 1788) to riots (most notoriously the tsuchi-ikki of 1441 and the Hamaguri Gate uprising of 1864) to the Onin War that began the Sengoku Jidai by inflicting ten years of attrition on the city. However, unlike other Japanese cities, Kyoto largely escaped aerial bombing by Yanks with Tanks during World War II; it was on the list of potential atomic bomb targets, but Secretary of War Henry L. Stimson got the city removed from the list because he had fond memories from his honeymoon there (it was replaced by Nagasaki)note This was likely secondary to a much more political factor: because Kyoto is Japan's cultural and intellectual nexus, if it was annihilated, Japanese culture would largely be snuffed from existence and all of Japan would have likely fought the Allies to the death, with catastrophic consequences. By keeping it intact, the Allies had a bargaining chip with which they could sway the more moderate minds of the Japanese to surrender unconditionally..

Kyoto emerged post-war with probably the highest concentration of traditional Japanese Architecture in the country, including around 2000 Shrines and Temples. Tourism serves as a major source of income for Kyoto, and Class Trips to Kyoto are common for Japanese schoolchildren in both Real Life and fiction. However, with all the historic and cultural prizes the city has, don't think that the city is stuck in the past—modernization is quickly replacing old buildings with modern architecture. The massive Kyoto Station

, serving the national railways, Shinkansen, and Kintetsu private railways, is a sore spot for many traditionalists.

To Kyoto's traditional industries of highly-regarded kimonos and sake production have been added electronics (Kyocera) and video games (Nintendo). The Toei Company also maintains a film studio in Uzumasa, which also serves as a public attraction; Kyoto Animation, meanwhile, isn't technically in the city itself but in the southern outskirt city of Uji (though we guess it's OK since it's still in the prefecture). Uji is also the location of the famous tea plantations, widely regarded as the best in Japan, if not the whole world, by the tea aficionados worldwide.

Kyoto is also the last bastion of full-formal, traditional geisha culture. While other cities like Tokyo do have geisha, only in Kyoto do the teahouses retain the full system of apprenticeship and the intricacies of formal kimono and other costuming as related to the wearer's stage of training.

Kyoto has also acquired a large number of universities, and has become home to numerous museums, including the Kyoto International Manga Museum.

Like other cities in Japan, Kyoto is divided into wards (区 ku), of which there are 11.

Works set in Kyoto include: