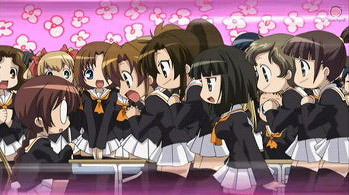 Even cute mutes get grilled.
Advertisement:

We've seen it every time someone new and mysterious appears, whether it's a New Transfer Student or Naïve Newcomer is given the third degree by the entire class or team. In some cases, there may be references to Noodle Incidents, Noodle Implements, or a Dark Secret.