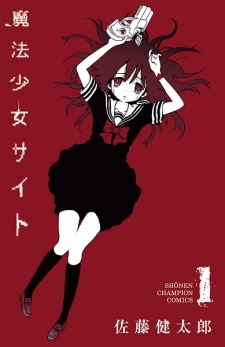 Aya Asagiri is a very misfortunate girl. Every day she is viciously bullied at school, only to come home and get beaten up by her older brother, Kaname. After a particularly vicious day, an image of a strange girl shows up on her computer and offers her 'Magical Power'. Before she knows what she is doing, she clicks 'yes'. The next day a pink, toy-looking gun shows up in her school locker. It isn't too long before she has to use it, with bloody results...

Watching from the shadows is Aya's mysterious classmate, Yatsumura Tsuyuno. She claims to want Aya as an ally, but can she be trusted?

Tropes depicted in this work