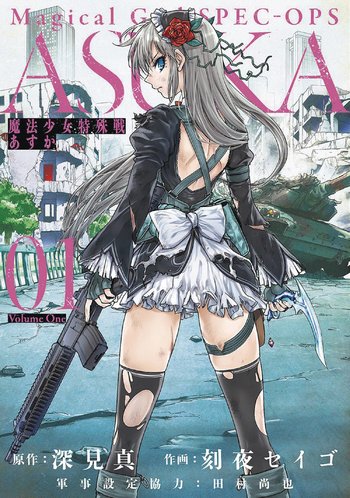 Military history is not the same anymore with magical girls around.
"It was said that Magical Girls defeated the very last boss whose mission was to wipe out humanity. But... the truth is there are no real endings in this world. Even after that boss was defeated, true peace never returned. We fight on a new battlefield of international crime, indiscriminate terrorism, civil wars, conflict... The Magical Girls' battle isn't over. It never ends."
— Asuka Otori
Advertisement:

Three years ago, the extradimensional Netherbeasts invaded Earth. The world's military was brought to their knees, finding their weapons powerless against such foes. But, thankfully, a group of five Magical Girls fought off and stopped the invasion, and were hailed as heroes across the world.

Asuka was the leader of the legendary Magical Five, but fast forward to today and she hasn't used her Magical Girl powers in a long while, wanting no more to do with the whole thing. But circumstances have eventually forced her to wield her power once more...

Magical Girls Special Operations Asuka (Mahou Shoujo Tokushuusen Asuka) is a Darker and Edgier Magical Girl manga by Fukami Makoto, and also serves as a Deconstruction by way of realistic outcomes. How would the world fare when Magical Girls and Netherbeasts are common knowledge, as well as their obvious military applications? Do Magical Girls get PTSD?

The manga was serialized in Big Gangan from 2015 to 2021 for 69 chapters, and was compiled into 14 volumes. An anime adaptation aired in Winter 2019, which was licensed by Funimation for an English release.