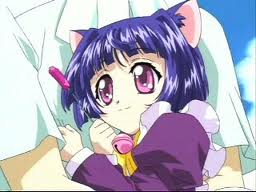 The manga was created by Kaishaku and serialized in Shueisha's Ultra Jump magazine from 2001 to 2003, and compiled into three volumes. The anime was made at roughly the same time by studio Madhouse and directed by Tsukasa Sunaga, spanned twelve episodes and aired from July to September, 2001.

Both incarnations follow a race of pet cats, drawn as Catgirls and the occasional Catboy. The story observes the exploits of the humanized magical pet cats as they interact with each other, their owners and the world around them.

Taruto is a little cat who has just moved to a new city with her master's family. She spends her days making friends and exploring her new hometown, and also has a knack for getting herself into trouble. And it turns out that Taruto just might be a legendary magical princess.

Almost none of Taruto’s friends believe that she can use magic or that she’s a princess, but Taruto is determined to prove it to them.