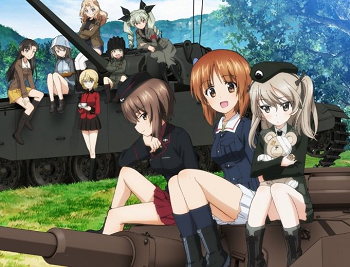 There is a large overlap between fans of cute girls doing cute things and fans of heavy military equipment doing explosive things. Starting in the aughts and continuing into The New '10s, anime producers started to notice this overlap and started making shows to cater to both tastes simultaneously.
Advertisement:

A Military Moe show features cute girls in the military, or in military-like situations (Girls und Panzer, for example, is about tank combat as a high school sport). It will often feature Good-Looking Privates both on the battlefield and in their personal lives, juxtaposing the two in whatever way best fits the tone of the story, whether dramatically, saddeningly or comically. Expect varying levels of Fanservice. Usually a World of Action Girls.

See Small Girl, Big Gun, which many characters are likely to sport in some fashion. Sister Trope of Girls with Guns.

Note: This trope describes a show, not a character. Individual characters may fall under Good-Looking Privates.