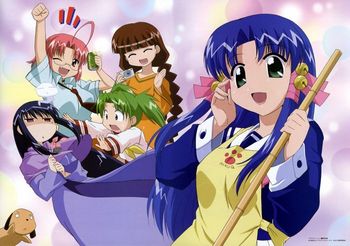 Mahoraba ("Splendid Place") is a shonen manga by Akira Kojima, which was serialized in Monthly Gangan WING from 2000 to 2006 and compiled into 12 volumes. It was adapted to a 26-episode anime that aired in 2005.
Advertisement:

First-Year College student Shiratori Ryuushi moves into the boarding house, Narutakisou. Under the tender care of Aoba Kozue, Narutakisou provides a home to people whose personal lives are all painful in one way or another; yet together, somehow, they make up a true family. Not only does Shiratori find a home at Narutakisou, but he also finds himself falling in love with a girl who is far more than she seems.

With An Aesop in every chapter, Mahoraba is one of those "feel good" sort of mangas. The sort you've likely never read before.

Compare with Maison Ikkoku, which has a similar setup of a romance at a boarding house, but is more grounded and aimed at an older audience. Not to be confused with Maburaho, which sits comfortably on the exact opposite end of the romantic comedy spectrum.

The anime adaptation is free to stream on Crunchyroll