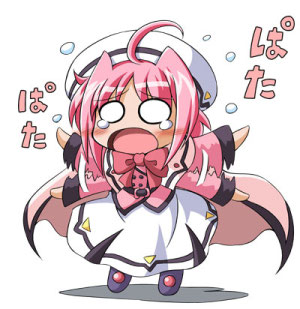 Female anime characters, when surprised, shocked, or threatened, will frequently throw their arms up in the air at a forty-five degree angle, just like a Kewpie doll. Moe characters are more likely to do this than others.

The trope can take one of two forms: either the character doing it will freeze into a tableau, or she'll flap her arms up into the kewpie doll pose and down again. Mere surprise more commonly elicits the first reaction; terrified or frantic characters are more likely to perform the second. The trope is largely confined to comedy series.