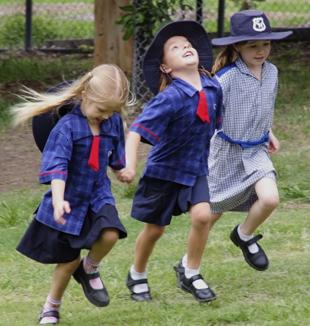 "Riley was supposed to be Mr. Joe Guy. We were gonna do dumb things like hold hands through the daisies going tra-la-la!"
— Buffy the Vampire Slayer, "Goodbye Iowa"
Advertisement:

A type of walk where the character swings their arms back and forth while skipping. This is a visual cue indicating that the character is innocent. That is, they are carefree, young and/or immature.

Characters that walk like this are most likely a Cheerful Child or a Genki Girl. If it is not the character’s default walk then it is sign of joyousness. It is almost always done exclusively by females because Females Are More Innocent (and it is kind of effeminate to begin with). Bonus points for whistling while doing this.