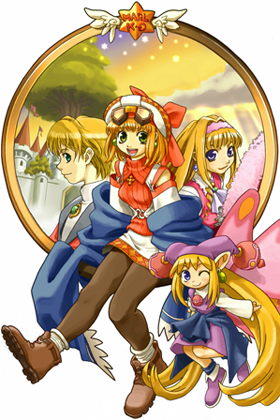 Rhapsody: A Musical Adventure, known in Japan as Marl Oukoku no Ningyou-hime (The Puppet Princess of Marl Kingdom), is a game developed by Nippon Ichi for the PlayStation (and later remade for the Nintendo DS, and later again as part of the Prinny Presents NIS Classics Vol. 3 Compilation Rerelease alongside La Pucelle: Ragnarok). It is the first game by the company to be released in the United States, and one of the first games to be developed before the company's love of insane Power Levels.
Advertisement:

The story is set in the aforementioned Marl Kingdom, and stars a young girl named Cornet, who possesses the ability to talk to puppets and dolls. She has a big-time crush on Prince Ferdinand, who rescued her from an evil Cat Girl. However, just as she nearly succeeds in winning the prince's heart, the witch Marjoly attacks the castle and turns the prince to stone, and then kidnaps him. Determined to win her beloved Prince Ferdinand back, Cornet sets out on a magical and musical adventure all over Marl Kingdom with her Fairy Companion Kururu and an assortment of other puppets.

Rhapsody appeals to a different demographic than most RPGs. On the surface it seems aimed at young girls, but it has become a Cult Classic, mostly due to Moe appeal. Besides, the tunes are catchy!

. Additionally, it gained a Spiritual Successor in the form of the Japan-only Princess Antiphona’s Hymn: Angel’s Score Op. A which includes a Marl Kingdom prince and Marjoly.

Not to be confused with the 2000 OAV anime Karakuri no Kimi (Puppet Princess).

Has a Character Sheet with characters from the whole series.