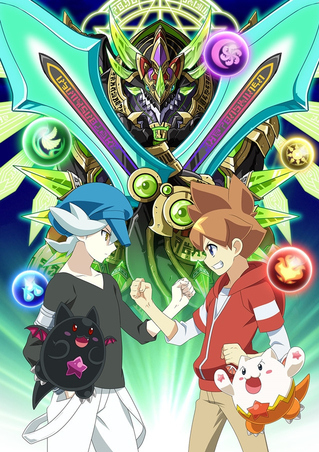 Puzzle & Dragons X (Pronounced as Cross) is a 3DS game release in Japan in July 2016. It's a spinoff of the wildly popular match three RPG Mobile game. You play as the child of King, ether a boy (Default name Ace) or Girl (Default name Ana) as they become a Dragon Caller while trying to figure out the mystery of their father's disappearance and receiving the Tamadra Tamazo.One big difference between it and the main mobile game is the Cross-on system. Your character is always the Leader, and you can get different Soul Armors to gain different Leader skills and forms.

It was also adapted into an anime for the Summer 2016 season under the same name by Studio Pierrot, following Ace.

open/close all folders
The Game
The Anime