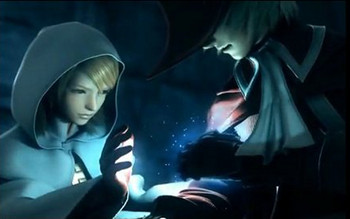 "You're hurt! Hold still..."
"I am Wrys, a humble curate. I cannot fight, but this staff I carry can heal your wounded. Take me with you, and you’ll be very glad you did."
— Wrys, Fire Emblem: Shadow Dragon
Advertisement:

A White Mage is a character archetype and often a gameplay archetype that focuses on healing and/or buffing magic. They may also have access to magic that causes some status effects. Modern incarnations will often be given some offensive ability, often magic of the holy variety, though the Elemental Powers of water or wind may be given a healing affinity.

Frequently, White Mages will be extremely effective against undead, either through the power of the Holy Hand Grenade, Turn Undead spells, or Revive Kills Zombie characteristics.

Many games with a Character Class System or Job System, especially Massively Multiplayer Online Role Playing Games, will have a White Mage class that fulfills the Healer role.

A White Mage is almost always The Medic, although they have the addition of buffs. Female White Mages in Eastern RPGs are frequently the White Magician Girl, although they must also fit the personality requirements for that trope.

White Mages are frequently paired with a Black Mage as a Foil. They also frequently overlap with Squishy Wizard, though they tend to be more resilient than their chromatic counterparts.

Subtrope of Support Party Member. If a character has both healing and offensive magic in relatively equal measure, they are a Red Mage, instead. If a White Mage can sling healing spells while fighting on the front lines, you've got yourself what's known as a Paladin, or Combat Medic. Contrast Black Mage (the offense-oriented counterpart). Not to be confused with White Magic, which is only sometimes the source of a White Mage's power.