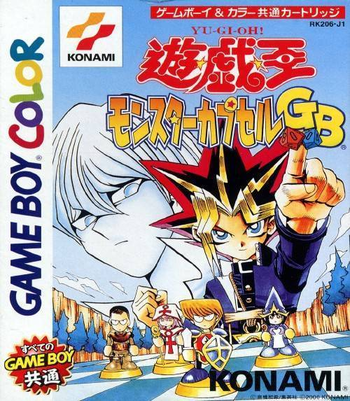 Yu-Gi-Oh! Monster Capsule GB is a Game Boy Color Yu-Gi-Oh! video game that was never released outside of Japan. It draws most of its inspiration from the manga's Monster World story arc and the Capsule Monster Chess stories, using both Duel Monsters and Capsule Monsters as game pieces.

After Death-T and Seto Kaiba's subsequent coma, the Millennium Ring saw potential in him and corrupted him. Set on revenge, Kaiba extends an invitation to Yugi and his friends to visit his Duel Tower. Once there, the Ring traps Yugi's friends and family inside RPG figurines. The only way to free them is to defeat Kaiba and his minions, the Dark Masters, and enter the RPG worlds and complete the storylines there.

Gameplay is a Turn-Based Strategy game similar to chess. Each monster has different stats and attacking ranges, which can be increased with items. Attacking is calculated by terrain and elemental advantages, whether or not an enemy can be attacked by more than one monster, and dice rolls — critical hits and critical fumbles can occur. When monsters are destroyed, they're lost forever, so players must choose battles carefully. In the RPG worlds, random encounters and some events are determined by dice rolls.