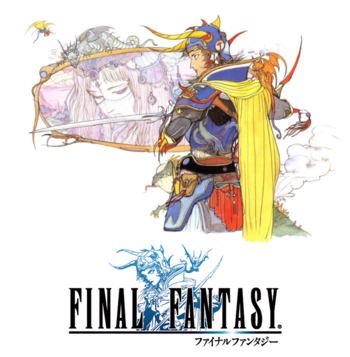 This isn't their final fantasy. Not by a long shot.
The world lies shrouded in darkness.
The winds die. The seas rage. The earth decays.
But the people believe in a prophecy,
patiently awaiting its fulfillment.
"When darkness veils the world,
four Warriors of Light shall come."
After a long journey,
four young travelers did at last appear...
...and in the hand of each was clutched a crystal.
— The opening note as re-translated for Theatrhythm Final Fantasy
Advertisement:

The first entry into the now lip-smackingly popular Final Fantasy series, released in 1987 in Japan and 1990 in North America.

In the 1980s, the Director of Planning and Development at Square was feeling dispirited about the game industry; after working on several games that failed to take off, he decided to produce one last game and retire.

The plot goes as follows: A series of elemental catastrophes have been threatening to plunge everything into darkness. Four mysterious Warriors of Light take it upon themselves to save the world by bringing the power back to four magical crystals (or "Orbs" in the NES translation).

...and that's pretty much it. It was almost entirely Dungeon Crawling, lifted whole-cloth from the first edition of Dungeons & Dragons: Your party go from town-to-town in order to save them from local threats and such. However, the plot had more complexities than the usual 8-bit fare: The party learns of "Four Fiends" who are sucking the Crystals dry, receive wisdom from the Circle of Sages, uncover a Lost World populated by people who were driven from their home in the skies, and travel through time.

The player controls the aformented Warriors of Light, and picks their jobs at the start: Warrior ("Fighter" in the original translation), Thief (kind of a misnomer since they behave like Ninjas and can't "Steal" anything yet), Monk (previously "Black Belt"), Red Mage, White Mage, or Black Mage. Each have select types of weapons and armor they can use, and your spell list is also limited by their brand of magic, i.e. you can purchase the spells but not everyone can use them. Completing the sidequest near the middle of the game will promote them to Prestige Classes: not only does this change their appearance, it causes their stats to skyrocket and allows mages to learn stronger spells. The game has three modes of transportation besides walking: pirate ship, canoe (for nagivating rivers the ship can't fit into), and airship. Final Fantasy's main competition in Japan, Dragon Quest II, only had three characters with pre-set abilities and a single mode of transportation by comparison.

Final Fantasy saved Square from bankruptcy. The legend goes that Sakaguchi chose the name knowing the project would likely fail and that he and SquareSoft would retire from the video game business; little did he know that his gallow's joke would become the longest-running oxymoron in gaming nomenclature. However, according to Sakaguchi, the team wanted something which could be abbreviated using the Roman alphabet. They were also set on something which could be condensed into four-syllables; Final Fantasy (pronounced “efu efu” in Japanese) fit both criteria. Though, “Final” wasn’t the team’s first choice: it was supposed to be Fighting Fantasy. However, they had to nix that title when they discovered that there was already a board game called Fighting Fantasy, which is based on a series of British adventure books.

Originally released in 1987 on the Famicom (1990 for the NES version), it was first ported to the MSX2 in Japan in '89. A remastered version for the WonderSwan Color was released in Japan in 2000; the WonderSwan version was the basis for the 2002 PlayStation port as a part of the Compilation Rerelease Final Fantasy Origins, and later the 2004 Game Boy Advance port. Like Origins, the GBA version (Dawn of Souls) was bundled with Final Fantasy II, but it added four new Bonus Dungeons. For the 20th anniversary of the Final Fantasy series, it was again remastered for the PlayStation Portable and the Japanese Nintendo 3DS eShop. There are also versions of the game for mobile phones. In 2021, this game was remastered as a part of the Final Fantasy Pixel Remaster series, which was released on PC via Steam and mobile devices.

The NES version of the game is available on the Wii Virtual Console and PlayStation 3 PlayStation Network (which can also be played on the PSP) worldwide. The NES Classic in North America and Europe also included it (Japan got Final Fantasy III, instead), as did the Nintendo 3DS and Wii U Virtual Consoles in Japan.

The fighting game Dissidia Final Fantasy serves as a sort of prequel which gives events in this game a bit more depth and exposition, while Stranger of Paradise: Final Fantasy Origin is another prequel spin-off to this game.

The popular webcomic 8-Bit Theater was (very) loosely based on this game, though it later incorporated characters from Final Fantasy III and Fire Emblem: The Sacred Stones, among other things. The strip also paid homage to the fact that Square lifted many of the game's mechanics from D&D. Also somewhat notable for being adapted into the very last episode ever, fittingly enough, of Captain N: The Game Master.

Final Fantasy I contains examples of the following tropes: