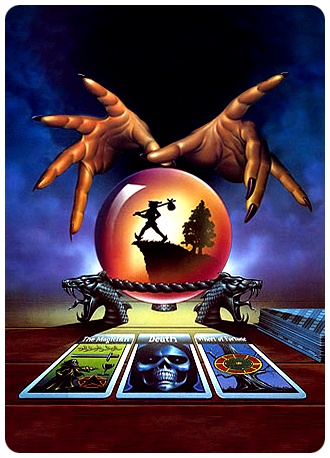 Puzzle-addicted students hated me because they flunked their exams. Business folks hated me for arriving blurry-eyed on the job. And even newlyweds hated me for ruining the honeymoon.
— Cliff Johnson
Advertisement:

The Fool's Errand is a 1987 Puzzle Game based on Tarot Motifs, with players helping The Fool outwit the sinister High Priestess. Some puzzles are old standbys like crosswords and jigsaws; others could only be realized electronically, such as forming shapes by switching on and off overlapping regions that cancel each other out. The endgame incorporates clues obtained from each of the 80 sections, making this the first "meta-puzzle" video game.

It was designed by Cliff Johnson for the Apple Macintosh, and ported to MS-DOS, Amiga, and Atari ST. With the original publishers out of business, Johnson has deemed the game Freeware, along with his other classics At The Carnival and 3 in Three. Downloads are here

A sequel, The Fool and His Money, was announced in 2003...and triumphantly released in 2012 after being postponed 38 times. It can now be purchased

for Windows or OS X.

Tropes found in The Fool's Errand:

Tropes found in The Fool and His Money:

Alternative Title(s): The Fool And His Money