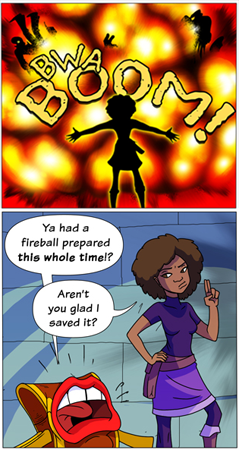 Leeky Windstaff: You did not actually prepare any sonic energy spells today, did you?
Vaarsuvius: Not as such, no.
Leeky Windstaff: Truly, more wizards have been laid low by the writings of Jack Vance than by any single villain.
Vaarsuvius: On an unrelated note, would you consider a brief pause in the battle? Say, about eight hours or so?
— The Order of the Stick, #345

Vancian Magic is a specific sub-set of rule magic which conforms to these functional rules (and optionally whichever metaphysics the writer chooses):

This tends to create the problem that the mage must somehow know (or at least predict) which spells will be most useful in the near future. If you are expecting combat, then you (probably) aren't going to prepare a "talk with animals" spell that day, which may leave you up a creek if that's precisely what you need to do later. (And if you use up all your spells too quickly, you may really be up a creek later.)

Naturally, this approach to magic is a lot more common in non-interactive media (where it's of course easy for the creators to match the character's spell selection — when it's even explicitly shown — to the later needs of the plot) than it is in video games, which, while often inspired by Vancian Magic, stretch its rules quite a bit since demanding a lot of magic preparation in a game could easily become annoying and/or create pacing issues. As such, most games that involve magic base its rules around the much simpler Mana Meter, or some mix of the two tropes.

The disapproving term is "Utility Belt Magic" (you load it, then have N buttons to press).