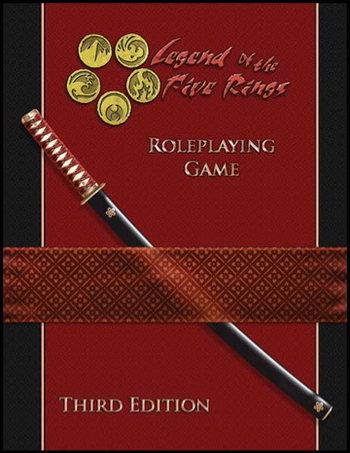 "Welcome to Rokugan, where honor is a force more powerful than steel."
Advertisement:

Legend of the Five Rings started out as a Collectible Card Game created by AEG and later branched out into a tabletop role-playing game and a series of tie-in novels. It gained renown as being a game where the players shaped the metaplot (through which clans won victories in the card game). The game's setting is Rokugan, an isolationist empire which is a mishmash of Japanese, Chinese and Korean mythology and culture. The nation is ruled over by an Emperor and is made up of clans of samurai, each of which vies for the Emperor's favor (or, depending on the era, the throne itself). Players generally choose one clan to identify with and collect.

Gameplay for the card game is pretty good, and is well-received. First off, you have to have two decks: your "Dynasty" deck comes with a black design on the back, and the "Fate" deck has green backing. Fate cards go to your hand, whereas Dynasty cards go to one of your four "Provinces" (IE a little patch of territory on your table), where you flip them right side up and then deploy them if you want to (or can). The main kinds of cards you'll find in your Dynasty deck are "Personalities" (characters, essentially) and "Holdings", whose Gold totals are used to deploy things. But there're also "Region" and "Event" cards; one modifies the province it popped up at, and the other modifying the game until the end of turn. Meanwhile, your Fate deck provides you with "Items", "Followers", "Spells" and "Ancestors", all of which which essentially Status Buffs that you deploy on a Personality. There are also "Action" cards that you play out of your ownself.

There are Variable Player Goals available. For "Military" victory, destroy all Provinces belonging to anyone who isn't you. An "Enlightenment" victory requires you to play the eponymous Legendary Five Rings, proving their spiritual worthiness to rule. An "Honor" victory, which symbolizes your clan's impeccable reputation and political standing, takes advantage of what is essentially your Life totals, Honor points: if you can get them above 40, you win. Finally, you can also drop a "Dishonor" victory on your opponents by getting their point score below -19, thus proving that they are unfit to rule.

The tabletop RPG is known for being deadly and focusing on social interaction as much as combat; the setting was also adapted to Dungeons & Dragons rules in that game's 3rd Edition Oriental Adventures handbook. In 3.5E, it was expanded into its own campaign setting, called Rokugan. Recently, RPG players have also been able to shape the plot through special LARP events held at major conventions, or through a specially-designated forum for online roleplaying known as "Winter Court".

The original story arc featured a war between the six Great Clans of the Empire for control of the throne. This war was spurred on by the vengeful yet manipulative consort of the young Emperor, as her clan had been destroyed by the other six years before. As the conflict grew, it was revealed that the Dark God Fu Leng had broken free of his prison to possess the sickly young Emperor, and a band of heroes (reincarnations of the original samurai who defeated him centuries prior) put aside their differences to face him.

Several more story arcs followed, including the continued story of the new Toturi dynasty (which withstood the wrath of the reality-dissolving Nothing, a new Dark Lord of the Shadowlands, the return of a heartless sorcerer and his minions, and a few conspiracies from within) only to fall to more political infighting between clans, leaving way for another war of succession. A new dynasty has begun with the coronation of a Divine Empress blessed by the Heavens, but the fledgling ruler was forced to deal with an invasion from Kali-Ma the Destroyer, a threat from outside of the Empire's borders. Ultimately, the Rokugani people were victorious only by embracing the Dark Lord's Spider Clan as allies and allowing Fu Leng to be reborn into the world to destroy her, drastically changing the nature of Taint and the Empire's relationship to the Shadowlands in the process. The most recent story arc has centered around the Empire expanding to colonize new lands outside the Empire's borders, and seems to be shaping up for a succession conflict between the Empress's two sons, the elder arrogant but popular, the younger dutiful but raised among the Spider clan.

For those who are interested, the Kaze no Shiro

fan site holds a mirror archive of all the official published L5R story fiction from the very beginning. They tend to be a little behind in updating, but the current L5R story fictions are available at AEG's website

. For tropes pertaining to the different Clans, go to the character sheet.

On September 12, 2015 it was announced that AEG sold the rights to the Legend of the 5 Rings IP to Fantasy Flight Games.

In light of this announcement, FFG announced that they would be discontinuing the CCG in its current form for the time being, with intent to relaunch it under their LCG (Living Card Game) design paradigm. This also resulted in a full blown Continuity Reboot. On February 17, 2021, FFG announced that, with the release of Under Fu Leng's Shadow, the card game would be complete, though additional games are in development.

Meanwhile, the latest edition of the RPG was released by FFG on October 11, 2018, featuring the ability to play as a samurai in any of the six Great Clans, or as a ronin. It brought back the Game of Twenty Questions and made it the primary structure of character creation, leading players through important moments and decisions in their characters' lives in order to arrive at a fully-fledged samurai. The timeline takes place in the same Continuity Reboot as the LCG, and the game is played with a new variation on Roll and Keep using custom dice.

Several sourcebooks followed the core rulebook's release, focused on the various clans and their lands in Rokugan:

Like the other RPGs created by FFG, the company's restructuring under Asmodee saw the L5R RPG's development moved to its sister company, EDGE studio. While no details have yet been announced, there has been no indication that this move represents a new "edition" of the game, especially since some announced books for the game line have yet to be released.

The setting gives examples of: