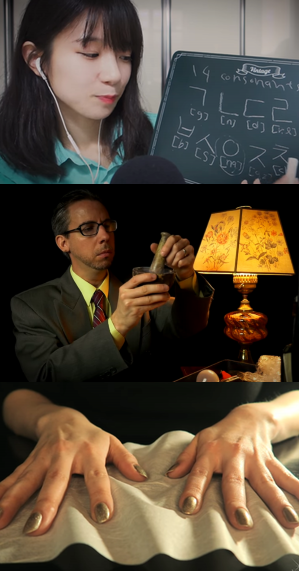 Some examples of ASMR triggers.
Top: Writing on a chalkboard.
Middle: Stirring salt with a mortar and pestle.
Bottom: Crinkling heavy fabric.
ASMR videos are a popular, if rather niche, genre of content on YouTube. They're specifically designed to provoke the ASMR responsenote Autonomous Sensory Meridian Response, a relaxing reaction to a variety of sensations and noises, sometimes described as "brain tingles" and typically felt as a tingling sensation on the scalp, neck, and/or upper spine, although it sometimes shows up as marked drowsiness in the viewer by incorporating a wide variety of what are referred to as trigger sounds, with some of the most popular being sounds of crinkling, tapping, scratching, sizzling, or even eating, as well as whispering or speaking softly. Videos can be as simple as the creator simply making the sounds, or be as involved as roleplay scenarios featuring costuming, props, and sets or greenscreen backgrounds.
Advertisement:

Creators from across the world post videos covering a wide variety of topics while featuring tons of ASMR triggers, and many channels exist specifically to cater to ASMR fans. Some people have also discovered that media outside the ASMR community can give the same reaction and have made videos documenting this; The Joy of Painting is one well-known example due to Bob Ross' baritone voice and soft, soothing manner of speech. On the other hand, the genre does have its detractors, with common criticisms being simply finding the concept creepy, weird, or silly. Also, many people have strongly negative reactions to the ASMR response or certain trigger sounds (misophonia sufferers especially).

Often used interchangeably with ASMR is "mukbang." Mukbang is a form of video where someone films themselves eating food (usually in large quantities) while talking to their viewers, either in a live-stream format or Fake Interactivity format. The trend began in South Korea but spread to other parts of the internet as well. Mukbang is not the same as ASMR, but many people find that it produces a similar effect as it involves similar triggers as ASMR videos. While mukbang does have a fanbase, it has been criticized for encouraging unhealthy binge eating, and along with being turned off by the sound of eating, people who aren't accustomed to East Asian cultures' acceptance of slurping may be turned off by that sound in particular.

ASMR video creators with pages on the wiki:

In-Universe mentions of the trope:

An ASMR video by College Humor that affectionately parodies the common tropes of an ASMR video.

An ASMR video by College Humor that affectionately parodies the common tropes of an ASMR video.