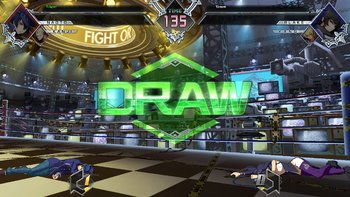 Two characters are so evenly matched that the fight doesn't end until they both land the knockout blow simultaneously.

Mutual Kill is the lethal version of this trope, and the blow does not have to come simultaneously either.

Sometimes the result of Fearful Symmetry. See also the Cross Counter. Compare Taking You with Me.