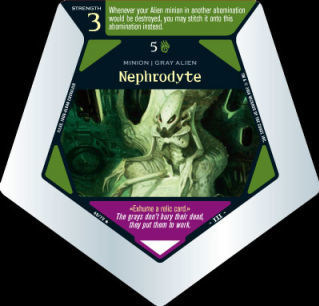 Hecatomb was a short-lived horror-themed Collectible Card Game created by Wizards of the Coast in 2005, notable for using 5-sided plastic cards in place of paper product. Lasting only three sets before being discontinued in 2006, it drew elements from many sources, ranging from mythology to modern day conspiracy theories like The Greys, as well as other works like the Cthulhu Mythos.

In the game, each Player represents an Endbringer-a being of Godlike power who travels from world to world, destroying each in turn to fuel their own power. Vying with other players, you release monsters, recruit cultists, enact rituals, craft or seek out relics, summon eldritch beings from beyond, and recruit Dark Gods to your cause-bringing about the destruction of a world in order to reap the souls of its inhabitants. Four Dooms represent avenues of power: Destruction (Red), Greed (Green), Corruption (Gray), and Deceit (Blue). All cards are one of the four, requiring at least one Mana of its Doom to play, with no multi-colored cards.

The game is structured differently than contemporaries such as Magic: The Gathering; rather than eliminating opponents, your goal is to enact your scheme to bring about the Apocalypse, which happens when a player reaches twenty Souls. Each player starts with 5 Souls, and receives 1 Soul at the beginning of each of their turns-the end of the world is inevitable, and forestalling it is difficult. Each player summons minions to serve as foot soldiers, with a catch-minions are all but useless on their own, and cannot attack or block unless 2 to 5 of them are 'stitched' together into Abominations. Abominations attack and block each other; unblocked, each Abomination will reap a number of Souls from the opponent equal to its size, plus any bonuses, up to whatever the opponent possesses at the time. Thus, the ever growing 'pool' of Souls forms a universal resource fought over and changing hands until one Endbringer can reach critical mass.

Supplementing these Abominations are Relics, Fates, and Gods. Relics are devices that provide continuous and sometimes global effects, which cannot be destroyed by combat. Fates are spells, rituals, rites, equipment, strategies and other such schemes that provide one-shot or temporary effects. Gods can only be summoned one at a time, deigning to join your cause to provide a triggered effect as they enter play, and a continuous effect while they remain. Mana is specific to each Doom, but any card can be sent to the Mana zone as a resource, rather than specific cards.