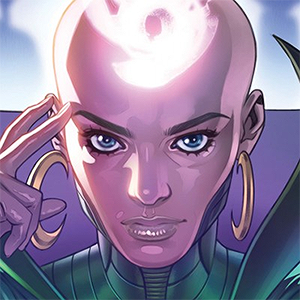 Baldness is commonly used as a visual indicator that a person is mystical, supernatural, or just plain wiser than those of us who have hair on our heads.

This portrayal owes a lot to the practice of tonsure, where monks and priests shaved all or part of their heads to display religious devotion, spirituality, or denouncing worldly attachments. It is practiced in several religions from Christianity to Buddhism to this day. As a result, it's not uncommon for fictional mages and mystical practitioners (Witches and Wizards, sorcerers, fortune tellers, soothsayers, oracles, sages), as well as characters who are monks and priests or inspired by real-life religious orders, to be depicted as bald. A religious/spiritual character like the High Priest, Hermit Guru, Barefoot Sage, Magical Barefooter, and Warrior Monk, or someone who wields Enlightenment Superpowers or Religion is Magic, might be depicted shaving their head or being totally bald in contrast to everyone else.

Another contributing factor is our association of wisdom with the elderly, who in turn tend not to have a lot of hair themselves. It's not uncommon to have a bald Old Master or some other Mentor Archetype (though male ones might have a beard to stroke wisely). Bald leaders likely have this strong association between wisdom and baldness to thank for their continued reoccurence (at least in part). And though this trope is gender-neutral, a bald woman, especially if she's young, is rarer and thus more visually striking than a bald man. A particularly powerful female mystic can thus be easily identified as such if she has no hair on her head.

The association of baldness with spiritual people and wise elders means this trope can also apply to fantastic humanoid creatures. A fictional species might also look a lot like us, save for their shiny bald heads that mark them as alien. Ghosts and other spirits are sometimes depicted as bald as well, showing that they're no longer present on this mortal plane. Posthuman Nudism takes this idea and applies it to the entire body.

Sister Trope to Mystical White Hair, another hairstyling choice that denotes the supernatural, and Super-Trope to Chrome Dome Psi for psychics who are bald (hairless characters whose Psychic Powers are informed by a strong genetic or scientific basis, as opposed to a religious or mystical one, go better there). Can overlap with Bald of Evil in the case of characters who are both mystical and conniving and Bald Head of Toughness if the character is also more durable or powerful than their full head of hair having peers. Contrast Baldness Means Sickness for a bald character whose baldness indicate their frailness instead of mysticism, though Sickly Prodigy and Sickly Neurotic Geek may overlap these two.