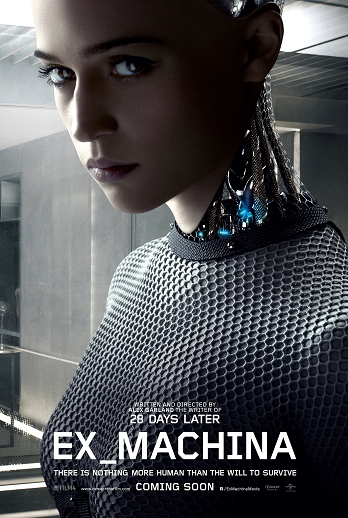 "One day the AIs are going to look back on us the same way we look at fossil skeletons on the plains of Africa. An upright ape living in dust with crude language and tools, all set for extinction."
— Nathan
Advertisement:

Set 20 Minutes into the Future, a young programmer named Caleb (Gleeson) who works at a dominant tech company wins a competition to spend a week in the isolated compound of the company's CEO, a reclusive billionaire named Nathan (Isaac).

Upon arrival, Nathan informs Caleb that he will take part in a Turing test, evaluating the human qualities of a highly advanced, intelligent and breathtaking female humanoid robot named Ava (Vikander). However, Caleb's purported involvement in "the greatest scientific event in the history of man" is not all that it seems. He soon finds out that both Nathan and his creation have deeper intentions than meet the eye, and this discovery slowly leads him to the dark truth behind the luxurious retreat.

The film mixes together a lot of AI-centric tropes, and dashes in a great deal of Alternate Character Interpretation when it comes to the three main characters.

It has nothing to do with the Brian K. Vaughan comic.