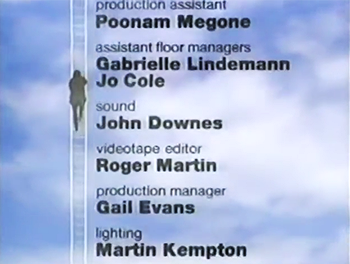 Stairway to Heaven? Try a ladder.
Ending by Ascending is when a character's story culminates with them going up a staircase, ladder, elevator, etc, often as the last or near-last shot in the work.
Advertisement:

As everybody knows, Heaven is above us. At the end of every individual's personal story, their soul (if they're lucky and believe in that sort of thing) will head on up into the sky to join the afterlife or what-have-you. So it's no surprise that many creators subtly invoke this idea by ending their stories with a character doing the same thing, but symbolically.

This can involve a literal Stairway to Heaven, but more often it's just a symbolic representation of redemption, escape, joining the outside world, relief after a long ordeal, or even new adventures yet to come. It's common for the audience not to be able to see exactly what the protagonist is walking into, perhaps because of a blinding light.

There might be another character left at the bottom of the stairs to melancholically watch them depart.

Like Climbing Climax, Climactic Elevator Ride and Journey to the Sky, it cites the feeling that Ultimate = Up, but unlike those tropes, where the ascent is mere prelude to a climax occurring in a high place, this trope is when the ascension is part of the Dénouement. If the ascension itself is difficult or fraught, and/or another scene occurs after it, it is likely not this trope. See Stairwell Chase and It's All Upstairs from Here.

A Sub-Trope of Hat-and-Coat Shot, this is a good way to signal to the audience that the protagonist's story is coming to a close. Close sister-trope to Off-into-the-Distance Ending; may overlap with Door-Closes Ending. Contrasted with Fly-at-the-Camera Ending, this trope is usually slow and measured, giving the audience and the character time to reflect on all they've just seen and done. Compare "Pan Up to the Sky" Ending and Flyaway Shot, when the camera does this instead of a character, and Winged Soul Flies Off at Death & Ascend to a Higher Plane of Existence, when your body can't come along with you. Contrast Grand Staircase Entrance and Staircase Tumble, when a character comes down a staircase dramatically. See also Absurdly Long Stairway.

Advertisement:
As this is an Ending Trope, all spoilers will be unmarked.

GLaDOS decides that Chell isn't worth killing and just lets her go.

GLaDOS decides that Chell isn't worth killing and just lets her go.