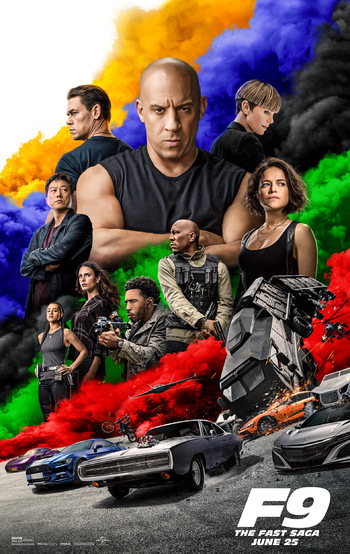 Not all blood is family.
"No matter how fast you are, no one outruns their past. And mine just caught up to me."
— Dominic Toretto
Advertisement:

F9 (also known as F9: The Fast Saga and Fast & Furious 9) is the tenth film in The Fast and the Furious series (coming after Hobbs & Shaw), though ninth chronologically.

Some time after the events of The Fate of the Furious, Mr. Nobody managed to capture Cipher, but his plane was shot down en route to transfer her to prison. The Family rides to his aid, with Dom specifically coming out of retirement when he learns that his younger brother, Jakob (John Cena) is involved. Jakob and his associates are going after a device called the Ares that has been split up and can cause catastrophic consequences if it falls into the wrong hands.

What follows is a personal feud between the Toretto brothers as the Family tries to get the pieces of the Ares before he does, but of course things aren't so cut and dry.

The movie was due to release April 2020 but was pushed back due to the COVID-19 Pandemic going into full swing across the globe at that point. The film was later released internationally in April 2021 and in the U.S. on June 25, 2021. A tenth film is set for release on April 7, 2023.