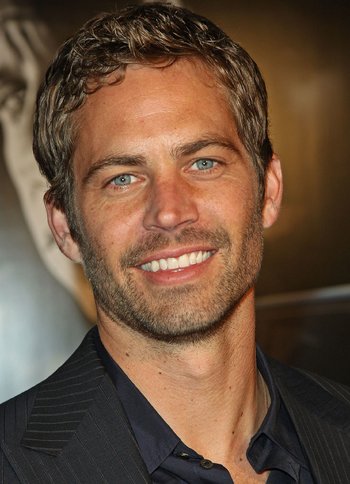 "We're only on the earth for a short period of time. Movies aren't enough. I want to take my success and parlay it into something bigger and better."
Advertisement:

Paul William Walker IV (September 12, 1973 — November 30, 2013) was an American actor famous for playing Brian O'Conner in the The Fast and the Furious film series.

His career as an actor began when he was only a toddler, appearing in Pampers commercials. He had begun modeling at age 2 and by the mid-80s began doing roles in TV and film. His first film role as a lead came in 1998 with Meet the Deedles, though it was not a commercial success. He did a few more supporting roles until he was cast in what would be his breakthrough role as Brian O'Connor in The Fast and the Furious which help secure more leading roles in Hollywood films, including the sequel 2 Fast 2 Furious and Eight Below which were commercial successes as well as a supporting role in the Clint Eastwood directed Flags of Our Fathers. He would later reprise his role as Brian O'Connor in the fourth, fifth, sixth and seventh entries in the Fast and Furious franchise.

On November 30, 2013, Walker was riding as a passenger in his Porsche Carrera GT driven by his good friend Roger Rodas, when Rodas suddenly lost control of the car and it collided with a concrete lamp post and two trees, killing both Walker and Rodas instantly as the car burst into flames. He was only 40 years old. At the time of his death, Walker hadn't completed filming for Furious 7, and it was delayed for rewrites. The song "See You Again", performed by Wiz Khalifa and Charlie Puth, was commissioned for the Furious 7 Soundtrack as a tribute to Walker.

"If one day speed kills me, don't cry. Because I was smiling."