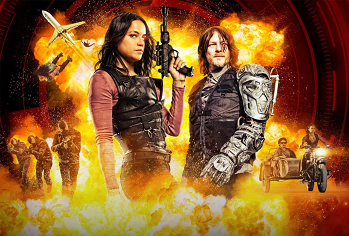 Oh yeah! You know lots of big, loud stuff is going to happen!
Marina: Ever notice how all the bad guys in action movies have TERRIBLE accuracy? [...] And why's the hero always gotta come out of retirement to stop her nemesis? And then it turns out that her partner was the true bad guy all along! GASP! The hero wins, but she gets chewed out by the chief for destroying a city block. Sound familiar?
Pearl: Yeah, that's one of my favorites! Actually, that's all of my favorites...
— Splatoon 2
Advertisement:

The Action genre is highly prevalent in movies and video games, and is characterised by a lot of adrenaline and blowing things up.

The typical scenario of the protagonists in an Action is a plot-specific — usually MacGuffin-retrieving — series of mini-stories in the form of fights or challenges, usually featuring extended violence with a prevalence of firearms because the protagonists are in direct physical danger. Over the years, the visual impression of these action scenes has become of tantamount importance, using cinematic techniques like The Oner with liberal use of visuals and Special Effects. Protagonists may be varying shades of Anti-Hero, but will almost always win.

The story or tension in Action typically shades in comparison to the visuals, but will be a threat of physical danger to the heroes or a loved one, often with a Race Against the Clock aspect.

Increasingly, the soundtrack has become as important to works in the action genre as the action sequences are. In film, the genre developed in the 1970s with the increase of modern stunt work.

In Hong Kong, they have a particularly booming Action movie production line — it's the home of John Woo, Bruce Lee, Jackie Chan and Jet Li movies — seen as the gem of the country's film industry and being heavily influenced by Chinese Circus and Peking Opera (stylised, highly dramatic acrobatic fight scenes as entertainment). See the Martial Arts Movie for more.

The Action genre can be qualified as submitting to Rule of Cool.

Has a lot of overlap with the Spy and Superhero genres as well as Fighting Series.

See also: So You Want to Write an Action Movie? and Action/Adventure Tropes.