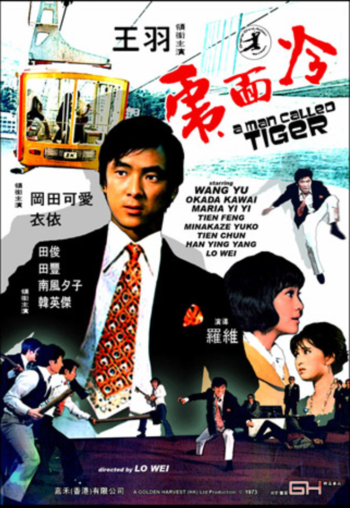 "For most of the movie it looks like a Japanese Yakuza film, plays like a Italian gangster film, and has the fight every ten minutes pace of a Hong Kong chop-socky pic, until suddenly, without any proper set up, we find ourselves into the beginning of the film’s extended climax." - Quentin Tarantino on A Man Called Tiger

A Man Called Tiger is a 1973 Martial Arts Movie directed by Lo Wei, starring Jimmy Wang Yu. A mix-and-mash of multiple movies popular at its time, made during the peak of Jimmy's career as an action star, it is the first of a short series of movies Jimmy made while in Japan nearing the mid-70s.

Chin-fu (Jimmy) is a mysterious wanderer in Yakuza-controlled Kyoto, who is picking fights in nightclubs owned by the mob and making a ruckus everywhere he goes, resulting in the Yakuza placing a bounty on his head. As it turns out, Chin-fu is the son of a Hong Kong police inspector killed in duty while investigating the Yakuza, and Chin-fu is seeking revenge. With the help of a nightclub singer named Ayako (who also have her own reasons to oppose the Yakuza), Chin-fu will rip the Yakuza a new hole.