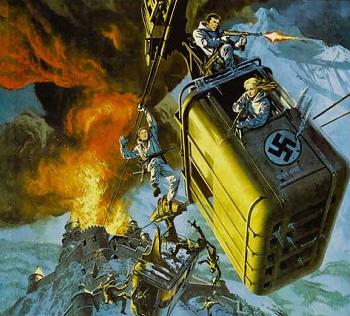 Is that action-packed enough for you?
Advertisement:

A Cable-Car Action Sequence is a fight scene or other tense Action/Adventure moment that take place aboard the gondola of an aerial-lift cable car, preferably while it is moving along its cableway.

This has some similarities with the Elevator Action Sequence, in that it forces a fight within enclosed quarters, while moving to another place. Amongst the differences is that it relies on acrophobia (fear of heights) rather than claustrophobia, as it has much more of a scenery. It also tends to be much longer a sequence, a cable-car ride taking more time than any ordinary elevator ride. It can also involve more people, and of course adds the danger of someone falling from a great height.

More often than not, the fight will take place on the roof of the cable-car rather than the cabin, to increase the chances of a Literal Cliffhanger or Disney Villain Death. This variant is closer to a Traintop Battle, though not as speedy.

Any such sequence might involve the antagonist trying to sabotage the cable-car and making all occupants of the gondola fall to their deaths, adding more pressure to the protagonist trying to stop this. If two cable-cars going in opposite directions cross, a character may jump from one roof to the other.