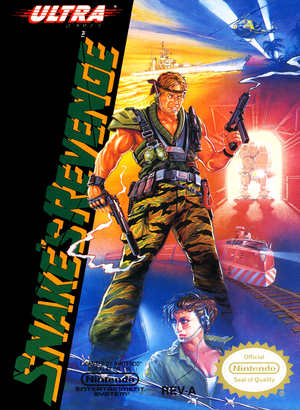 Lt. Solid Snake is a martial arts expert. He destroyed Metal Gear 1 and is now the leader of Operation 747.
Advertisement:

Snake's Revenge is an alternate sequel to the original Metal Gear released exclusively for the Nintendo Entertainment System in 1990. It was the first Metal Gear sequel made by Konami, produced without the involvement or consent of the original game's creator, Hideo Kojima (in fact, Kojima even remained unaware that the game even existed until one of his co-workers brought it up during a casual conversation), and in response to the success of the NES version of Metal Gear in the overseas market. Despite Kojima's lack of involvement, the existence of Snake's Revenge would inspire Kojima to design his own sequel to his game, resulting in the creation of Metal Gear 2: Solid Snake, relegating Snake's Revenge to non-canon status.

Three years after the Outer Heaven incident, FOXHOUND has learned that a nameless hostile nation has obtained the plans for Metal Gear. Solid Snake is called back into action to infiltrate the enemy territory. With the help of two new FOXHOUND members, weapons expert Nick Myer, infiltration specialist John Turner, as well as a double agent named Jennifer, Snake learns that the enemy have not only mass-produced the original Metal Gear model, but are now testing a new upgraded prototype called "Metal Gear 2."

Snake's Revenge is pretty similar to the original Metal Gear in terms of game design, although it is much closer to the original MSX2 version than the NES version. This time, Snake has an option to switch between his punches or using a knife for close range attacks (the latter allows him to kill enemies in one stab). In addition to the regular overhead areas, Snake's Revenge also feature several side view segments akin to Konami's own Rush'n Attack.