The Key Is Behind the Lock 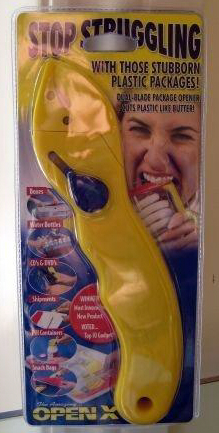 It's exactly what you need to unpack itself.
"This kind of packaging should be outlawed! Why does it still exist? I especially love when you buy scissors and you need scissors to open the scissors!"
— The Angry Video Game Nerd on Tiger Handheld Games

Something important is locked. There is a key. However, this key is inside. You need the key to reach the key.

While this trope can be Played for Laughs with trivial situations such as locking your car keys in the car, many works that use it choose to employ it in a far more dramatic manner. The hero is on a quest to find the key, eventually finding some other way to reach what he needed the key for - and then he finds out that his initial quest was futile; the key was inside all along.

In a video game, this can be used to create a Door to Before.

If The Key Is Behind And In The Lock, one possible solution is the Paper Key-Retrieval Trick. Otherwise Hairpin Lockpick, Skeleton Key Card or Shoot Out the Lock may help to resolve the problem.