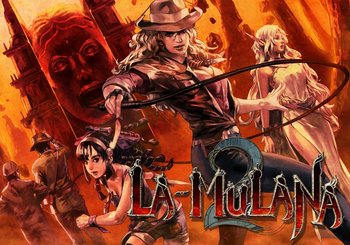 Here we go again.
"An ancient evil has awakened and you are the only hope."
— The end of the first trailer.

La-Mulana 2: The 0th Body, The 9th Spirit is a Metroidvania Platform Game developed by NIGORO and the sequel to La-Mulana. The game was announced in 2014 and it was successfully funded via a Kickstarter campaign

. It was released for PC and Mac via Steam, GOG, Humble Bundle and PLAYISM on July 30, 2018. A version for Linux is currently in development. Versions for PlayStation 4, Xbox One and Nintendo Switch were released in June 27, 2019 in Japan while the west is set to receive the game on early 2020 alongside the first game, courtesy of NIS America. Said console versions contains several characters from other indie titles and an updated soundtrack.

Five years have passed after the events of the first game. With his job as one of the 7th Children of Mother over, Xelpud converted the ruins of La-Mulana into a tourist attraction, earning money, women and a beautiful castle as his new home; Mulbruk set out to become a treasure hunter, living a happy life free from the ruins; and the Four Philosophers, now mortal again, work on restoring La-Mulana so future generations can study them. However, no one heard of Lemeza Kosugi, the man who explored the ruins of La-Mulana, ever again.

But this changed one day when monsters inexplicably started emerging from the ruins once again. Desperate and afraid that his new business might get ruined because of them, Xelpud contacted Lemeza once again to help him. Help arrived, but it was not Lemeza.

Enter Lumisa Kozugi, a young woman set to become an adventurer just like her father. Armed with a tablet and her trustworthy whip, Lumisa sets out to Eg-Lana, the land of exile hidden deep within the ruins of La-Mulana in order to find out what's going on.

On May 16, 2021, DLC was finally announced for the game: Tower of Oannes, which boasts difficulty to rival the first game's Hell Temple. It was publicly released on January 23, 2022.

Warning: Spoilers for the first La-Mulana might not be marked on this page.