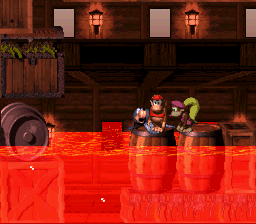 What are those barrels supposed to be made of?
"Using Surf to cross lava?!"
— Lance, Pokémon Adventures
Advertisement:

Real-life lava is molten rock (the subterranean version is called magma). Imagine an entire lake of electric-stove heating elements, all glowing red-hot. Its viscosity, or thickness, ranges from that of ketchup to much thicker than peanut butter – what you would expect of a liquid rock. It is an opaque emitter of yellow-to-red light. Its temperature is typically 700–1,200 °C (1,300–2,200 °F). Even the smallest flows will blister the skin before one can get close enough to touch it, while large amounts can cause fatal burns from much farther away. It is often accompanied by volcanic gas that can contain compounds that you do not want to breathe.

In fiction, Lava is Boiling Kool-Aid. It flows like water, it's no heavier than water, it can be diverted like water, and its solid form is less dense than its liquid form (like water). Objects can sink in it (although if you freeze part of it, the frozen rock won't sink). The heat will be trivial to overcome – not just Convection, Schmonvection, but people swimming around in it with a special suit or vehicle, or game characters only taking a finite amount of damage per second spent in the lava. Emitting light is optional.

Lava's animation (in video games or other media) is likely to be just as bad, especially in works where the technology and artistic technique to draw bubbling and flowing are limited. Lava will look like someone tipped a barrel of red Kool-Aid in a lake; if something falls in, it will still be visible, through the red tint of cherry flavour. This can be a justifiable omission, since for rendered graphics a plausible fluid-dynamics model could end up using more CPU power than the entire rest of the piece of media.

In many video games, lava is water recoloured red with a damage script attached (and sometimes the water causes just as much damage). Acid and toxic waste will probably be Lemon-Lime and Grape, respectively.

Now, of course, liquid rock can be heated to the point of water-like viscosity... however, lava heated to that degree, in reality, would have local thermodynamics of the sort that a human even a full football field's length away would be seared to ash, even under an open sky.

Compare Sand Is Water. Sometimes a subtrope of Palette Swap.

"The Cold Heart of Hate" is set in a volcano in Russia, yet a normal raccoon like Sly is able to be near it without dying instantly. Clockwerk has the excuse of being made out of some sort of super-metal.

"The Cold Heart of Hate" is set in a volcano in Russia, yet a normal raccoon like Sly is able to be near it without dying instantly. Clockwerk has the excuse of being made out of some sort of super-metal.