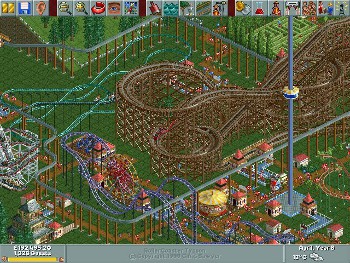 Guest 302 is lost and can't find the park exit.
RollerCoaster Tycoon is a simulation strategy computer game series that simulates theme park management and roller coaster design. The first two games were developed by MicroProse and Chris Sawyer and published by Hasbro Interactive and later Infogrames (today Atari SA), and they were widely praised for their originality and success in simulating a theme park. The roller coaster designer was a popular feature and was praised for its high attention to detail, with many real types of coaster available, and allowing very elaborate coasters to be built. A release for the Xbox for the original was released with mixed reviews, which turned out to be the same, but with hard-to-coordinate controls. The third game, which changed up the formula, was developed by Frontier Developments, while the most recent main game, titled World, is developed by Nvizzio Creations for Windows and Linux.

A release for the original version was planned for iOS and Android devices in early 2013, which was put on hold when Atari filed for bankruptcy, but was ultimately Un-Canceled with the release of Classic on 21 December 2016. The first three games and all their expansions are also available on Steam and GOG Dot Com, and an iOS port of RCT3, sans expansion packs, can be found on the App Store. Fans of RCT1 and RCT2 can play on the thriving open source implementation OpenRCT2