All Deserts Have Cacti 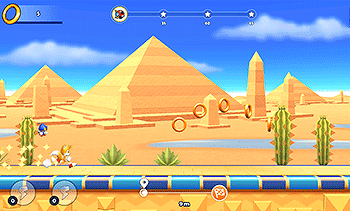 Desert Ruins: Where the architecture of Giza meets the vegetation of the Sonoran.
Advertisement:

The hero and his comic-relief sidekick are trudging across the burning sands, looking for water or shelter, and they walk past a towering saguaro cactus. The problem is, they're marching through the deserts of Arabia...

In fiction, most deserts have cacti, usually the classic two-armed saguaro

, though barrel and beavertail cacti are also popular. But the Sahara only has bushes, dunes and bare rock — cacti are only native to the Americas. And despite its common depiction as the ubiquitous cactus, the saguaro only grows in the Sonoran Desert, which covers mostly parts of western Sonora in Northern Mexico, Southern Arizona in the US, and a tiny bit of southern California. It does not include any part of Texas, Utah, New Mexico, Nevada, Chihuahua (which is actually only desertic near the US border), Baja California (which is an entirely different ecosystem), northern or central California, or even Northern Arizona or eastern Sonora (which is actually a subtropical land).

The entire family of Cactaceae is exclusive to the Americas in its native range — yes, even in high-altitude and colder areas.note except for the mistletoe cactus

, which can be found in Africa and Sri Lanka; and the nopal cactus

, which is a staple food in Mexico but has grown invasively in places such as Australia or the Mediterranean You'll only see them elsewhere if they've been introduced by humans to the area, or purposely cultivated for their fruit or decoration (usually, the latter leads to the former; feral prickly pears descended from ones raised for fruit are a pretty common sight in the semi-deserts of southern Europe and the deserts of North Africa and the Middle East).

This particular portrayal runs into some ambiguity when dealing with entirely Constructed Worlds — more to the point, ones in which the Americas or any other organism's real-life native range don't actually exist. In these cases, the presence of cacti in any or all deserts is not really any more or less unrealistic than the presence of any real plants and animals anywhere. Note, however, that such cases may still qualify if cacti are present in areas clearly themed around or based on real-life areas where cacti don't grow.

If you want to establish that you're in a hot desert, there's no better way than to throw in a cactus. Increasingly, this trope is used to justify a Intoxication Ensues or a Mushroom Samba; while many have heard of Peyote,

few realize that it is a cactus — at least until someone on television is trapped in the desert, dying of thirst, and remembers that cacti are full of water... And Knowing Is Half the Battle.

An alternative stereotype is that all deserts are nothing but hot, sandy wastelands — aside from the cacti — completely disregarding the fact that all deserts except Antarctica have vibrant ecosystems with their own unique animal and plant life. While cacti are the most well-known, you also have Aloes,

for example, which are native to Southern Africa and parts of Arabia and Agaves

which were native to Mexico but may now be found across the world. The bit about sand is also exaggerated, as many deserts, including where cacti grow native, are rocky rather than sandy — a sandy dune desert is specifically an erg

, the largest one in the world being Rub al-Khali

(mostly in Saudi Arabia), which also happens to have quite a bit of human development on account of being one of the most oil-rich places in the world. Additionally, a desert isn't always hot — it's less about heat and more about extremes. Desert landscapes have a tendency to fluctuate in temperature, meaning that someone traveling through the desert could potentially have to worry about heatstroke and hypothermia within the same 24-hour period.

If your game has a Shifting Sand Land level, expect to see cacti, often as spiky obstacles that damage you when you collide with them. Makes you wonder just how sharp these needles are for them to kill someone who bumps into them a few times. These are also some of the only notable features you can expect to see in a Sea of Sand.

Probably a result of either Artistic License – Geography or California Doubling due to lacking the budget to film on location elsewhere.

A subtrope of Misplaced Vegetation.