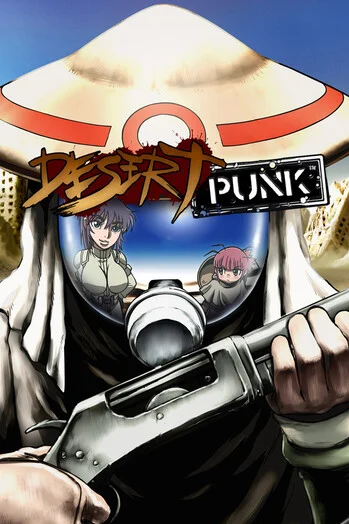 Suna-bōzu (literally "Sand Brat/Squirt"), known in English as Desert Punk, is a post-apocalyptic Seinen manga series written and illustrated by Masatoshi Usune. It was serialized in Enterbrain's Comic Beam magazine from August 5, 1997 to October 12, 2020, with all 139 chapters collected in 22 volumes.

The story takes place after a nuclear holocaust. Japan, like many other countries, has been reduced to a desert, and the surviving humans seek out a meager living in the hot sands. The diminutive 17-year-old Kanta Mizuno, nicknamed Suna-bōzu due to his seemingly incredible feats of skill and daring while on the job, scratches out his own living in the desert as a mercenary for the Handyman Guild between his occasional obsession with big boobs and sex, and, later, his training of an apprentice named Kosuna. Despite his flaws, he is highly professional, accomplishing his task no matter the cost.

Desert Punk was adapted into a 24-episode anime television series produced by GONZO and directed by Takayuki Inagaki with character designs by Takahiro Yoshimatsu and music by Kohei Tanaka. Funimation has licensed the series for distribution in the United States.